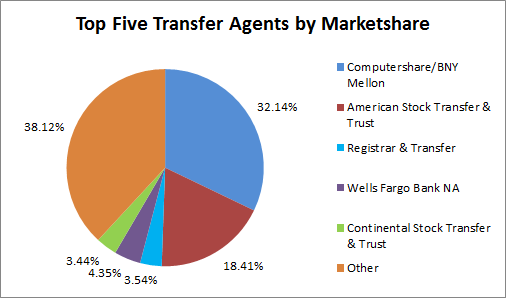 Last year, we looked at the Transfer Agents engaged by SEC registrants and found that the SEC market was dominated by a few agencies. Computershare/BNY Mellon (Computershare) led the pack with 30.9% of total market share, and American Stock Transfer & Trust (AST) was second with 15%. These two are the runaway industry leaders among SEC registrants, sharing 50% of the total market between them.

Since then, the basic landscape remains largely the same. Computershare and AST again have about 50% of the market share in 2013, while the next largest transfer agent has less than 5%.

Nevertheless, digging into the details, there have been some noteworthy changes since 2012. We noted last year that AST was adding clients steadily. A year later, AST still looks to be on the rise, having gained more than 500 new clients compared to October 2012. This has helped to close the gap between them and Computershare (15% and 31% in 2012, compared to 18% and 32% in 2013). Wells Fargo Bank is also showing growth, overtaking Registrar & Transfer to move into third place in total market share (4.35%). 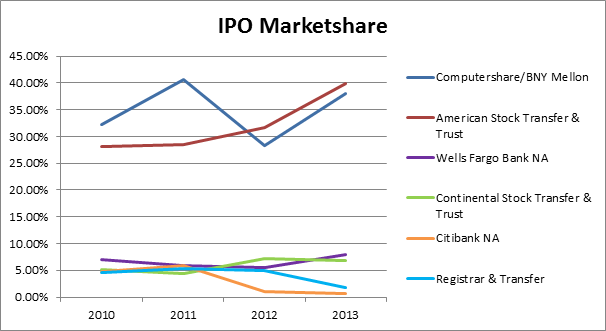 When we consider market share of IPOs, AST looks even better. Last year we noted that AST had just over 36% of 2012 IPO companies, a 3% lead on Computershare/BNY Mellon. In 2013, they still lead the way: AST has grown to nearly 40% of the IPO market. Computershare, however, rebounded from a sharp decline and is now practically neck and neck with AST.

We look forward to following these trends as they continue to develop. It will be interesting to see whether any of the smaller transfer agents can make a push to challenge Computershare and AST, and whether AST will continue to gain on Computershare.