The Center for Audit Quality has released its fourth annual Audit Committee Transparency Barometer. The Barometer, compiled and published in partnership with Audit Analytics, provides a year-over-year comparison in key audit committee disclosure areas and assesses the extent of audit committee disclosures for the S&P 1500 composite companies, broken out by Large Cap (S&P 500), MidCap (S&P 400), and SmallCap (S&P 600).

The fourth edition of the Barometer shows strengthening trends, as companies across all three indices are providing additional disclosures and voluntarily improving existing disclosures to tailor specific company activities. Key findings include:

Between 2014 and 2015, audit committee-related disclosures appeared more consolidated, specifically with the formation of the “Audit Committee Matters” section and sub-sections. Last year, we continued to see this transformation in addition to an increase in the quantity and quality of audit committee disclosures. This trend continued into 2017, particularly with the S&P 500 companies providing additional disclosures and details relating to discussions of the Audit Committee’s considerations in appointing the audit firm. As noted by the Wall Street Journal, the rise of Audit Committee transparency is encouraging, but there is still room for improvement.

The discussion of the considerations in appointing an audit firm for S&P 500 companies increased by 6 percent over the past year. Furthermore, S&P 500 companies are beginning to provide tailored discussion, specifically to the company, as seen in Activision Blizzard Corp’s proxy statement this year. This example was not used in the 2017 Barometer, but is an example Audit Analytics is highlighting for the purposes of this blog. 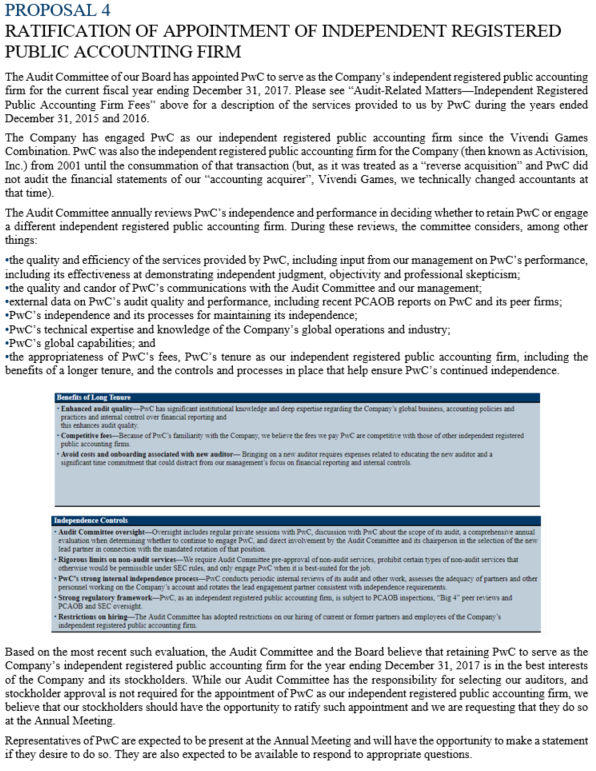 Activision Blizzard expanded its Ratification section to specifically pinpoint how PricewaterhouseCoopers’ qualities were considered when selecting the audit firm to act as an auditor for the company. Also, Activision Blizzard provides company and audit firm specific details for the benefits of long term tenure, audit quality indicators and the independence controls the company has in place. Since 2014, audit tenure disclosures have increased by 25 percent for S&P 500 companies.

In last year’s proxy, Activision Blizzard provided a more modest disclosure relating to the ratification of the audit firm, stating that the Audit Committee selects the auditor.

Overall, the 2017 Audit Committee Transparency Barometer indicates growth in both the quality and quantity of audit committee disclosures within proxies.