The table below magnifies the outcomes of the 0.9% of votes against auditor ratification over the past 3 years. 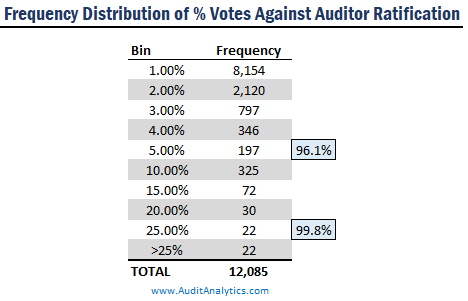 That said, sometimes shareholders – for whatever reason – vote in large numbers against the ratification of the auditor. Over the last three years, the largest percentage of votes against auditor ratification has decreased.

While shareholders’ votes carry advisory power, the Board of Directors is under no mandatory obligation to take voting results into consideration. All five companies mentioned above have reappointed the auditor despite shareholder objections.

Keep in mind, this is a magnified analysis, as votes against ratification only comprise about 1% of the total votes.

For more information about Auditor Ratification, or for a complete list of companies having the highest percentage of votes against, please contact us at info@auditanalytics.com.