In this post, we summarize some of the highlights from Cheffers’ and Kueppers’ presentation.

When considering the liability faced by the accounting industry, it is helpful to consider a metaphor. Below is an image of a bridge, representing the elements that go into the required disclosures of public companies. One of the goals of a public company is to communicate as well as possible the true condition of the company to its stakeholders. A company must “bridge” from reality (the true condition of the company) to disclosure (the representation of that reality). To do so, a company must rely on the professionalism and ethics of its management team (the materials that comprise the structure of the bridge). The professionalism and ethics of the management team must overcome complexity and human nature in order to best disclose the company’s condition (the obstacle the bridge must span).

Below the image of the bridge and river is a list of factors that are to be considered when assessing a company’s professionalism, ethics and complexity. 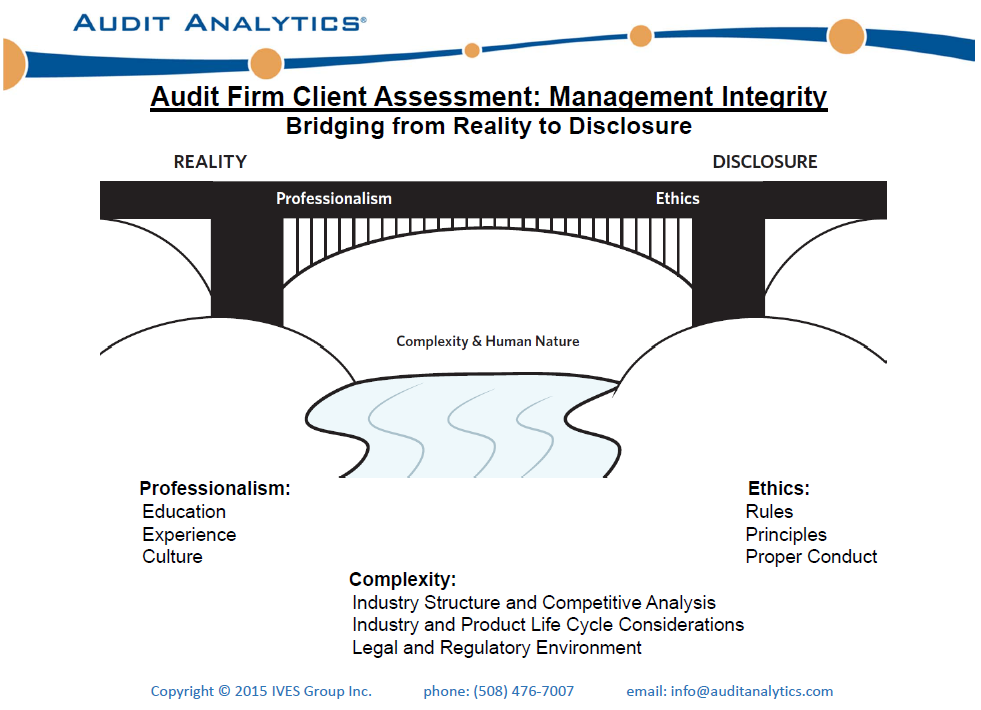 The difficulties attributable to human nature, such as excessive optimism and a tendency to succumb to the pressure to achieve goals, are reflected in the data revealed by looking at trends in financial restatements, changes in accounting estimates, and out of period adjustments. If restatements and adjustments are corrections of merely neutral human error, the consequence of these error corrections should just as likely be positive as negative. As the data shows, however, restatements and adjustments are significantly more likely to correct overstatements of assets and income. Indeed, “negative” restatements tend to occur about six times more often than “positive” restatements. Similar skews are seen for out of period adjustments. Changes in estimates reinforce that interpretation by having an inverse relationship. When management changes an estimate, the change is much more likely to positively impact assets and income.

These considerations help to put accountants’ liability in context. Let’s turn to some of the trends that bear on this liability.

For five consecutive years, the number of auditor malpractice claims against one of the Big Four auditors has stood in the single digits. A high of 46 claims was reached in 2002 – reflecting the chaos in the wake of the dot-com bubble – whereas only two claims were filed during each of the years 2014 and 2015.

2015 was also a relatively quiet year for auditor malpractice settlements. The totals of such cases were not enough to break into the Top 50 All Time Accounting Malpractice Settlements since 1991- the threshold of which is now $68 Million, as shown in the chart below. 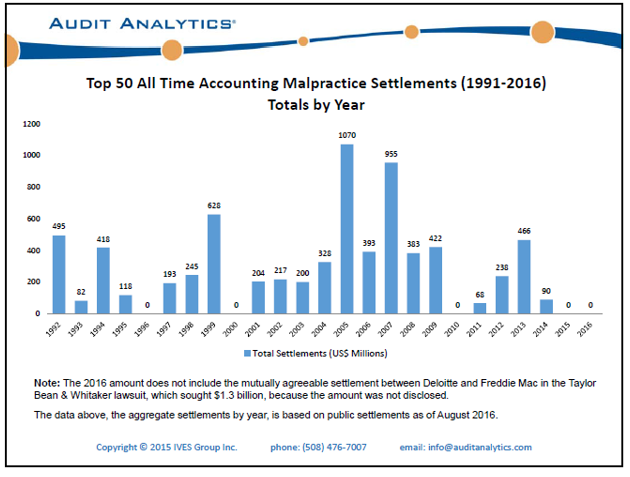 AAR Corp’s 2015 financial statement is a good example of this deviation, depicted below. Note that the blue, sawtooth line indicates a high occurrence of the even numbers 4, 6, and 8 at the expense of 1 and 9. 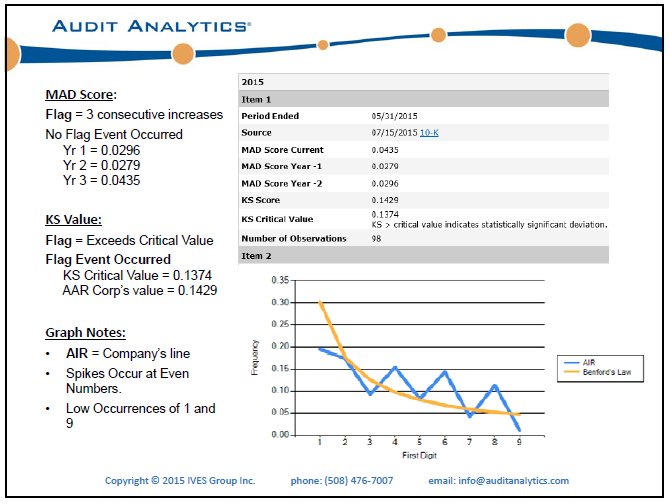 Also included in the presentation was a sneak peak of our upcoming going concerns and audit fees annual reports. For complete statistics, check back for our future release of those reports!

To request a copy of the complete presentation or for further information, please contact us at info@auditanalytics.com.