On May 14, 2013, COSO released an updated version of its Internal Control – Integrated Framework. The original version, which was released in 1992, was superseded by the 2013 version – effective for fiscal years ended after December 15, 2014.

As we approach the fourth anniversary of the implementation of the 2013 COSO Framework, adoption is nearly complete for companies with audited Internal Control over Financial Reporting (ICFR) opinions, though companies with management-only reports are still lagging.

In 2017, only two companies with audited ICFR opinions reported using the 1992 Framework (less than 1%), while an additional six did not identify the framework used. 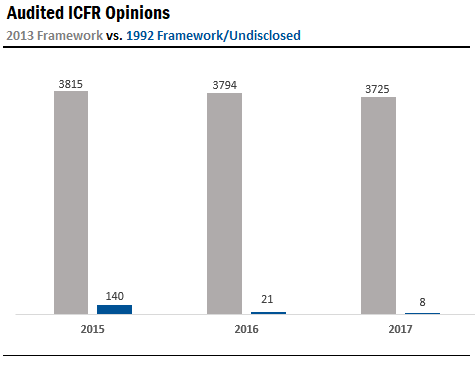 Yet, only 70% of companies with management-only reports have adopted the 2013 Framework. Although there is improvement from last year (up from 63% in 2016), it is unclear why almost one-third of the companies are not using the new Framework. 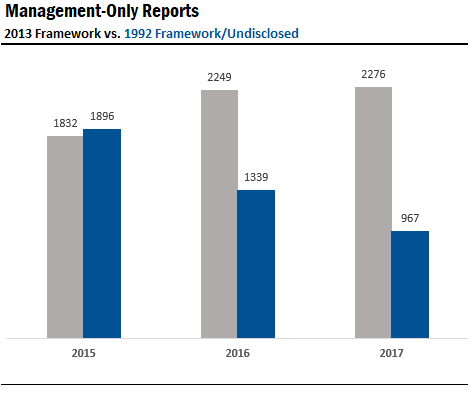 In last year’s analysis, we suggested that there is a strong correlation between 2013 COSO Framework adoption rate and ineffective internal controls, and that controls that are not effective under the 1992 Framework may be just as ineffective once the more rigorous 2013 Framework is used.

One possible explanation is that companies with ineffective ICFR simply do not have the resources needed to either adopt the new framework or to remediate the ICFR weaknesses.

Whatever the reason, COSO has indicated that it no longer supports the original version of the Framework released in 1992 and considers it to be superseded by the 2013 version. While more than 99% of companies with audited ICFR opinions have completed the implementation, there is still a large amount of companies with management-only reports relying on the old Framework.

For more information on this analysis, please email us at info@auditanalytics.com or call (508) 476-7007.