Audit Analytics recently released its annual report covering audit and non-audit fees of SEC accelerated filers. The report is available free to subscribers or for purchase to non-subscribers.

In the report, we studied the audit and non-audit fees paid by accelerated filers since 2002. This research found that for 2014 the ratio of non-audit fees over revenue was the lowest for the thirteen years under review and is the first time the value was below 10%. In comparison, the ratio of audit fees (including audit-related) to revenue experienced a 1.9% uptick. This year’s analysis also looks at audit fees surrounding a financial restatement.

A review of non-audit fees as compared to audit fees is of interest for many reasons, one of which is that the SEC considers high non-audit fees to be an auditor independence concern.1 To address this concern, the SEC adopted a set of rules that include requiring companies to disclose fees paid to their auditor in four separate categories: (1) Audit Fees, (2) Audit Related Fees, (3) Tax Fees, and (4) All Other Fees.

Highlights from the Report 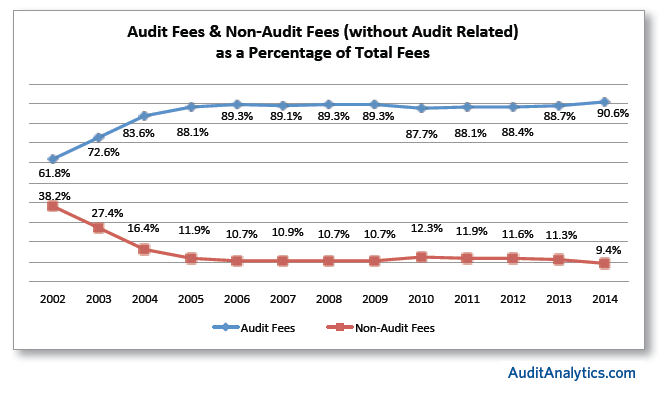 As we wrote about recently, the EU has instituted a rule that would cap non-audit fees at 70% of audit fees. As we can see here, and as we found in informal research, the vast majority of US companies pay non-audit fees well below that threshold.

To offer a different perspective on fees, we can also look at changes in audit fees as a percentage of revenue. The graph below shows the average amount of audit fees per 1 million dollars in revenue since 2002. Over this time there have been a few major events affecting both auditor regulations and company revenues that become visible when you look at the data. 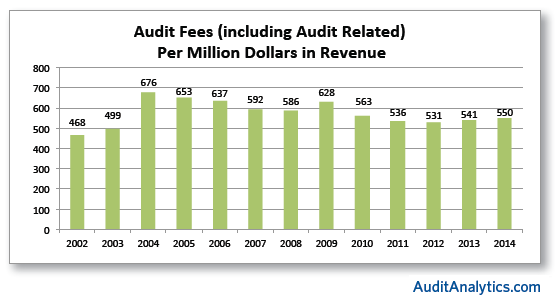 The passing of Section 404 of the Sarbanes Oxley Act (SOX 404) greatly increased reporting requirements, including an evaluation of the effectiveness of a company’s internal controls over financial reporting (IFCRs). US accelerated filers were required to comply with SOX 404 on or after November 15, 2004, and as a result we find that in 2004 audit fees as a percentage of revenue reached $676 dollars per million; the highest of any year under review.

In this year’s report, we also investigated changes in audit fees surrounding the disclosure of a financial restatement. As indicated in the following tables, which show audit fees (including audit-related) for 30 accelerated filers that disclosed an Item 4.02 restatement in 2012, there appears to be a spike in fees around the time of the disclosure. 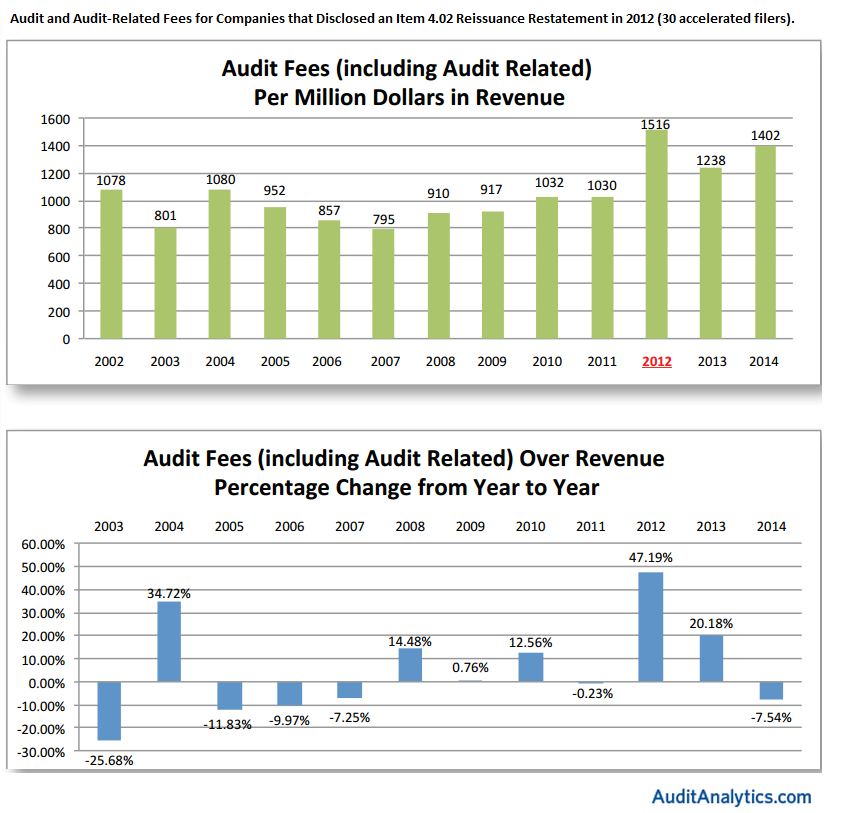 For further details on the topics above and for much more information on Audit Fee and Non-Audit Fee trends over the last thirteen years, see the full report here.