This is the second part of a two-part post exploring market share of audit firms for companies with revenues $10 million to $150 million. Get caught up on part one here.

To gain insight on the length of auditor engagements, the number of years an audit firm has been engaged at one company within this population was examined. 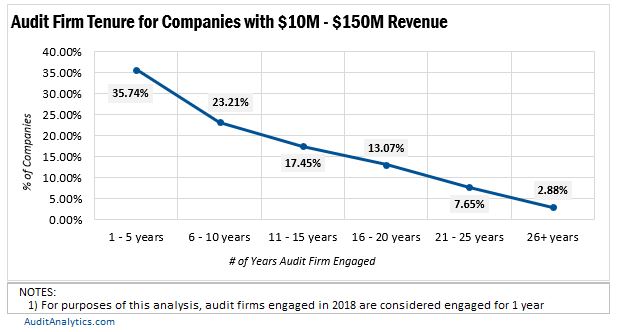 Six companies have engaged an audit firm for longer than 45 years. Of those six companies, two have revenues less than $50 million.

As of 2018, there are six non-Big Four audit firms with tenures longer than 30 years. As a notable contrast to the Big Four top tenure spots, there is only one company out of the six that has revenue greater than $100 million. 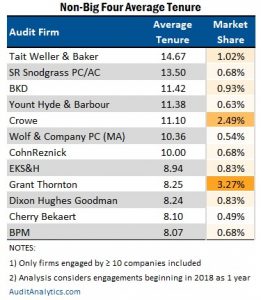 To explore average tenure length and its relationship to market share, we compared average tenure of non-Big Four audit firms to the overall market share percentage (including the Big Four) that was calculated in Part 1 of this post. For a more comprehensive average, only non-Big Four firms with more than ten company engagements were included in the analysis.

There is not a strong indication that a bigger overall market share means longer audit tenure.

An analysis of the 25 non-Big Four audit firms that are engaged by ten or more companies with revenues $10 million to $150 million revealed an average tenure of less than 15 years.

Of the top audit firm average tenures, only three firms of the twelve have an overall market share greater than 1.00%: Tait Weller & Baker, Crowe and Grant Thornton.  Each of those firms are engaged by more than 20 companies and have average tenure length greater than 8 years.

Comparing average audit firm tenure based on company filer status reveals a similar pattern when the Big Four are included, as well as excluded, from the averages.

Of note, there are only two non-Big Four firms that have each been engaged by one company with a Did Not Disclose filer status for 12 years, resulting in a 12 year average for Non-Big Four firms with DND filers. Aside from this, the average length of audit firm tenure, regardless of the Big Four, follows relatively the same trend for all filers.

For more information on this post, or for subscription information, email info@auditanalytics.com or call us at (508) 476-7007.