A third of large- and mid- cap Polish companies changed their audit firm from 2016 to 2017, and most of those that did saw their audit fees increase significantly.

The European Union passed regulation that requires companies to put their audit out to tender every 10 years and rotate their auditor at least every 20. Individual countries were allowed to set stricter limits and Poland enacted one of the strictest, requiring firms to rotate after five years.

Looking at the WIG 20 and the mWIG 40 – the two major indexes of the Warsaw Stock Exchange – we found that 16 companies changed their audit firm from 2016 to 2017. The table below lists these 16 companies, as well as their previously dismissed and recently engaged auditor. 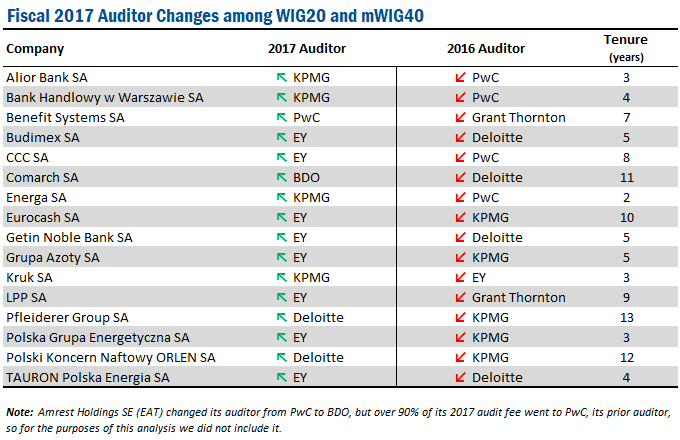 EY lost one client and gained eight, for a net increase of seven. The other Big Four gained some but lost more. BDO was the only firm with no loss and one gain. 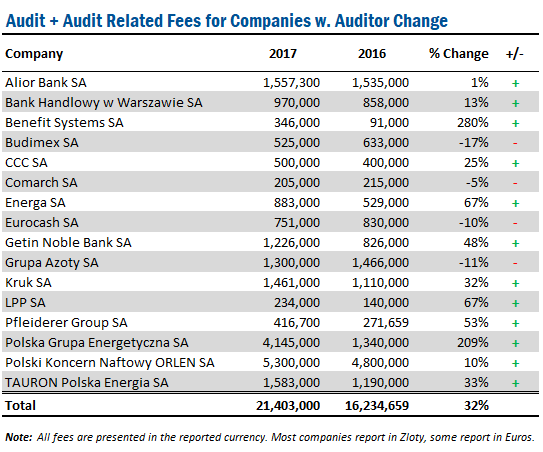 As shown in the table above, three-quarters (12/16) of the companies that changed auditor saw an increase in fees, by an average of 70% (with a couple outliers pulling up the average). Four saw their fees decrease; in their case by an average of -11%.

This seems striking. Auditor rotation rules in the European Union require companies in the “public interest” to change their auditor. If companies find themselves faced with significant increases in audit fees when it comes time to rotate, this could pose challenges to the new regulation.

But what about the companies that didn’t change their auditor? What do we see with their audit fees? Much the same, surprisingly.

Of the 42 companies that didn’t change their auditor, nearly two-thirds saw an increase in audit fees – not far off the proportion of those that did change audit firm. However, their fees only increased by an average of 34% compared to the 70% increase for the companies that changed.

Even more surprisingly, when we consider non-audit fees, the companies that kept the same audit firm actually saw higher overall increases in their total fees than those that changed audit firm.

This blog is the first in what will be an ongoing series investigating changes in the audit market in the EEA. For more information about this post or our European databases, please contact us at info@auditanalytics.com.