BDO had another great year in terms of SEC audit clients. The Global Six firm won 54 new clients compared to 14 losses, for a net increase of 40 engagements in 2014, to go along with a net increase of 57 last year. While BDO’s growth in 2013 was largely due to acquisitions, 2014 saw more organic growth.

Speaking to Accounting Today, chief executive officer Wayne Berson noted that “Organically, we added 39, and by expansions we added 15, so even if you back out the expansion-related additions, we would have comfortably maintained our position.”

But client wins and losses don’t quite tell the whole picture. Deloitte, for example, may have lost a net of 8 clients, but their net increase in audit fees was $27.6 million. In other words, the clients that they won brought in significantly more fees than those they lost (assuming the fees remain relatively constant). 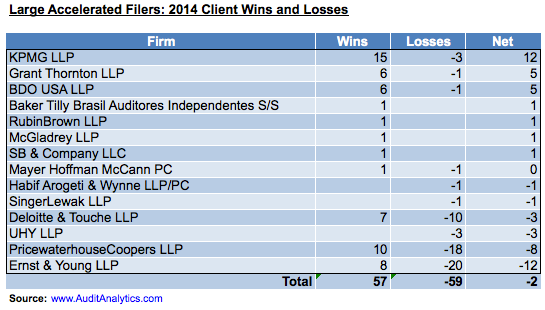