The first quarter of 2016 was a relatively quiet one in terms of SEC-client auditor changes among the major global and national firms. EisnerAmper led the way with five wins and one loss, for a net increase of four new clients. Each of the national firm’s wins came from Regional and Local firms.

Deloitte, Marcum, and Grant Thornton were the only other firms to see an increase during the period. And, after a string of strong results, BDO managed only to break even this quarter, on four wins and four losses. 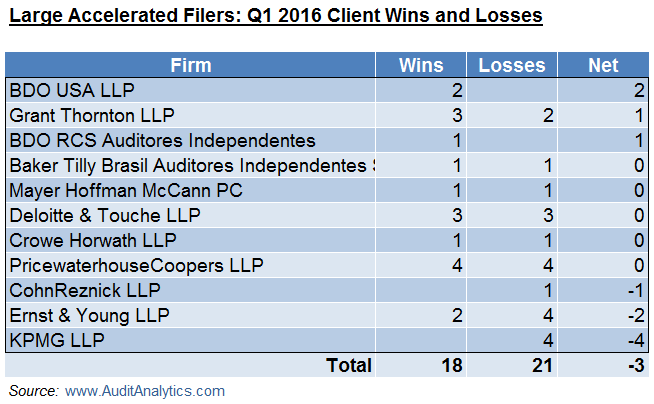 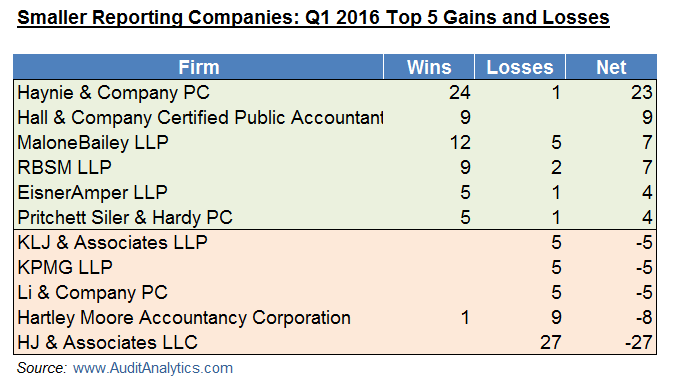 Haynie & Company and HJ Associates bookend the wins and losses among Smaller Reporting Companies, with the former winning 24 and the latter “losing” 27. That’s not just a coincidence: the two Salt Lake City firms joined forces after Haynie acquired HJ. Another pair of wins and losses are related by acquisition: Hall & Company, based in Irvine, CA, acquired the Anaheim-based Hartley Moore in February.

All these mergers and acquisitions have added up over the past decade. We’ve seen a steady decrease in the number of PCAOB-registered firms since 2006.

MaloneBailey, RBSM, and Pritchett Siler & Hardy continued on their successes from 2015. For all of last year, these firms won a net total of 38, 41, and 16, respectively.