Since a change in regulation came about in 2010, it has become significantly more common for shareholders to vote on the company’s independent auditor. That change, first implemented by the NYSE and then approved by the SEC, limited a broker’s ability to vote on certain non-routine matters without the direct input from the ultimate shareholder. Since the vast majority of shares in U.S. public companies are managed by brokers, one consequence of this rule change was a potential difficulty in obtaining a quorum in shareholder votes. In order to make it easier, companies have since begun:

to ensure that there is at least one proposal on the company’s proxy card that is still “routine” under new NYSE Rule 452, such as the ratification of auditors. So long as there is at least one routine proposal on the proxy card, broker non-votes, or an indication from a broker that they have not received instructions from a client on a routine matter, are generally counted for purposes of establishing a quorum for the annual meeting under Delaware law.

Although these auditor votes are typically non-binding and are not required by regulation, they have nevertheless come to be considered best practice.1  Companies that give shareholders a vote on the auditor are much less likely to have restatements than those that don’t.

Audit Analytics recently announced the release of our latest product offering: Accounting + Oversight. One of the exciting features of this new module is a database of results for auditor ratification votes.

The next figure is a histogram chart of the same distribution analysis, which gives a pictorial view of the same data. 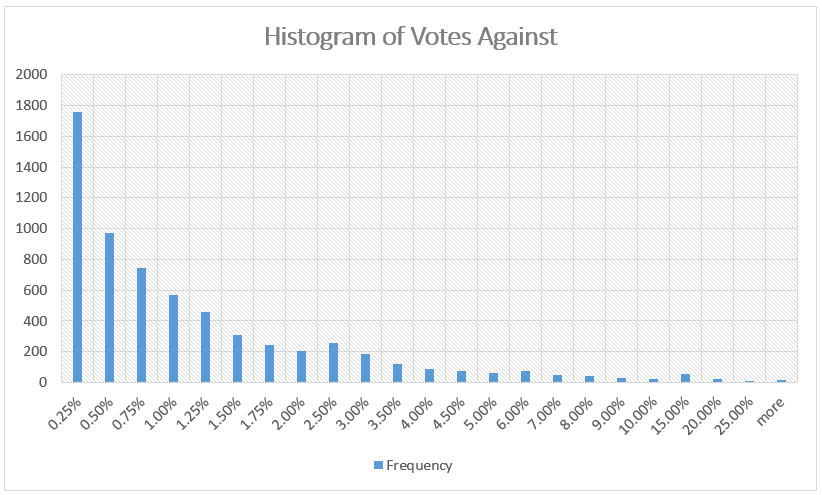 This graph shows quite clearly how frequently and resoundingly the auditor is ratified. This suggests, then, that in the rare cases in which the shareholders voice significant disapproval of the auditor, further investigation might be in order. There is evidence in the accounting literature, for example, that votes against ratification are positively correlated with auditor tenure, implying that shareholders are skeptical of long auditor tenure.

In future posts, we hope to continue digging into this auditor ratification data. It would be interesting to see what the correlation is between strong shareholder disapproval and subsequent auditor changes.

1. For a thorough look into the history and context of shareholder approval of auditors, refer to this series of posts at The Race to the Bottom.↩