In this post, we will look at auditor changes and auditor tenure among the Russell 1000. More than two thirds of the companies in the Russell 1000 have auditor relationships stretching back more than 10 years, with Procter & Gamble (NYSE: PG) topping the charts at 126 years with Deloitte. 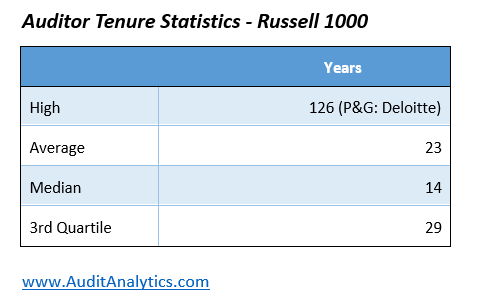 Auditor tenure and rotation remains a hot topic for discussion. In 2011, the PCAOB issued a concept release seeking feedback on mandatory auditor rotation (MAR). A slew of comment letters against the approach, and a bill that was passed by the House of Representatives in 2013, led the PCAOB to abandon its pursuit of mandatory audit rotation in early 2014.

The EU, of course, has famously mandated auditor rotation across all its member states. (We discussed EU Regulation 537/2014 in another post in 2014.) Italy has required MAR for over forty years. Research using Italy’s data has found no evidence of improved audit quality, but has shown a huge increase in market share concentration to the Big Four firms. In September of this year, the Monetary Authority of Singapore (MAS) released a proposal to discontinue MAR in local banks. Brazil and South Korea have also discontinued their MAR policies.

Turning back to the United States, around 18 Russell 1000 companies have switched auditors in 2016, which is a slightly lower than the historical rate of about 4%-5% auditor turnover among the Russell 3000.

A little more than half of the companies in the Russell 1000 that made auditor changes this year had previous auditor tenures lasting over 10 years, including American Electric Power Company, which ended a 105-year relationship with Deloitte and engaged PwC. There were also a few companies who changed auditors after less than four years of engagement.

Here is a sample of auditor changes and the outgoing auditor’s tenure from Russell 1000 companies made in 2016. 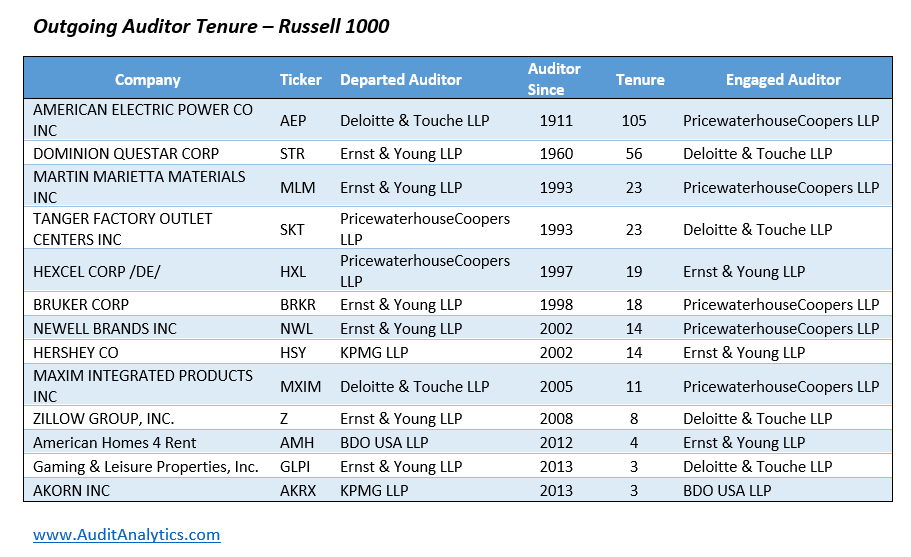 Audit Analytics is the leading provider of auditor market intelligence. Contact us for more information about auditor tenure and our other data services.