This is yet another major event in the UK audit market to occur in the past few months. Not long ago, Grant Thornton issued the surprising news that they would no longer pursue audits of FTSE 350 companies. More recently, the Competition and Markets Authority launched its investigatory review of the audit market. This prompted leading firms to make almost draconian decisions, such as dropping all non-audit work for audit clients, supporting a market share cap for auditors of the FTSE 350, and more.

Now two of the largest ten firms in the UK are combining their businesses, seemingly towards the objective of consolidating BDO’s position among small and medium sized companies. The impact of this merger on the market has already been the subject of much discussion. In this post, we’ll look at the data we have on the client counts for these two auditors to assess the likely impact of the merger.

The biggest impact of this merger will be to solidify BDO’s position as the leading audit firm among AIM-listed companies. 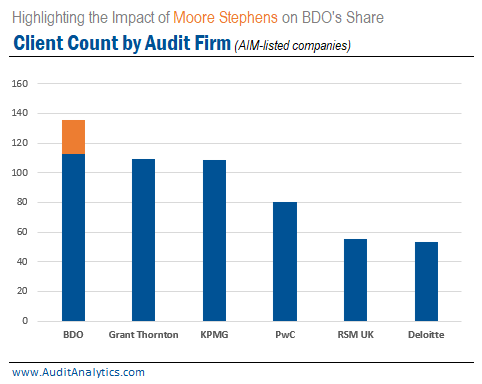 Adding Moore Stephens’ AIM clients (assuming they all stick with BDO) pushes the firm well into the lead. The Alternative Investment Market (AIM) is a sub-market of the London Stock Exchange. It is not regulated under the EU and therefore companies listed on this sub-market do not have to comply with the more stringent requirements of Public Interest Entities (or PIEs – more on them below). It is geared towards smaller and medium sized firms, allowing them access to capital without overwhelming them with regulatory burdens.

The merger will also add a sizable number of PIEs to BDO’s client count. The following chart is based on the 2017 Transparency Report disclosures of the UK firms of the Big Four, plus BDO, Grant Thornton, and Moore Stephens. 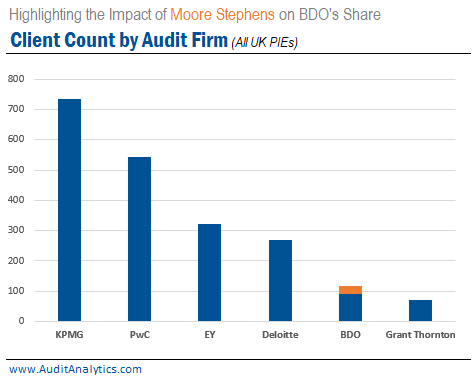 By total PIE client count, BDO still trails behind the Big Four. However, Moore Stephens adds a significant percentage to their total.

Perhaps the biggest impact of the merger is reflected in the total revenue that Moore Stephens brings to BDO in the UK, adding £120 million. 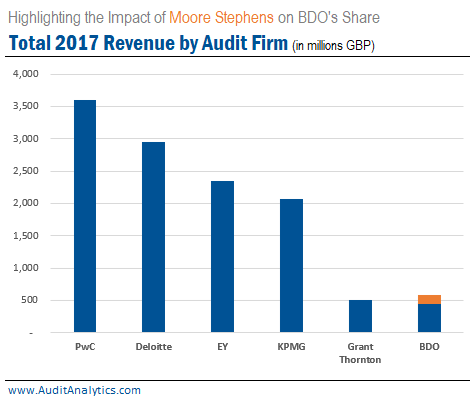 With the acquisition of Moore Stephens, BDO looks to push into fifth in the rankings based on total revenue, behind only the Big Four and ahead of Grant Thornton, which – based on fiscal 2017 numbers – was still ahead of BDO.

For more information about this post or our European databases, please call 508-476-7007 or email info@auditanalytics.com.