Accounting estimates continue to be a hot topic in the industry – for regulators, auditors, corporations, and investors alike. Investors are as concerned with current, relevant information as ever, but today’s corporations aren’t quite like the staid manufacturers of a few generations prior: many of the largest corporations in this knowledge economy continue to evolve beyond tangible assets and concrete metrics. As a result, auditors are forced to base their opinions on prognostications that are as uncertain as they are material. And regulators are left to write the rules governing these complex accounting situations.

The task may be large, but perhaps the outcome will be worth the effort. To give a sense of the role that accounting estimates play in financial statements, we performed an analysis of our Changes in Accounting Estimates database. The database comprises disclosures made pursuant to ASC 250-10-50-4, which requires companies to disclose the nature and effect of any change in estimate that has a material impact on the company’s financial statements.

We have written about these changes before, covering items like breakage, percentage-of-completion revenue recognition, and more. At the very least, these are items affecting comparability that any stakeholder ought to be aware of. At worst, they can be cases of potentially serious earnings management.

In order to narrow down the population of these changes, we decided to focus on a relatively simple area of accounting: depreciation and amortization. Most depreciation methods involve an estimate of the “useful life” of the asset being depreciated. Take, for example, a piece of machinery in a factory. The asset cost $500K, and the company estimates that the machine will work for 10 years, with no salvage value. Assuming the machine was put into service on the first day of the fiscal year, then using the straight-line method, the company would recognize $50K in depreciation expense on this asset each year for the next 10 years.

Now, suppose at the beginning of the second year, the company determines that, due to advances in machine maintenance, the piece of equipment will now last for another 25 years. The asset’s book value after one year of depreciation at the old rate is $450K. With that change in the asset’s estimated useful life, the company would now recognize $18K in depreciation expense on this asset each year for the next 25 years. Although the total depreciation expense over the course of the asset’s life is the same ($500K), the impact to the period in which the change was made was a relative decrease in depreciation expense of $32K. That is to say, with very little substantive change to the company’s business, operating income is set to receive a nice bump in the year of the change compared to the year prior.

Since the fourth quarter of 2007, there have been 558 changes in accounting estimates related to the estimated useful lives of depreciable assets, made by 540 unique companies. The impact of these estimate changes range from the tens of thousands of dollars to the hundreds of millions – even into the billions.

Perhaps the most striking fact about these changes – depending on one’s level of cynicism – is the strong likelihood that the changes will have a positive impact on a given company’s financial statements. 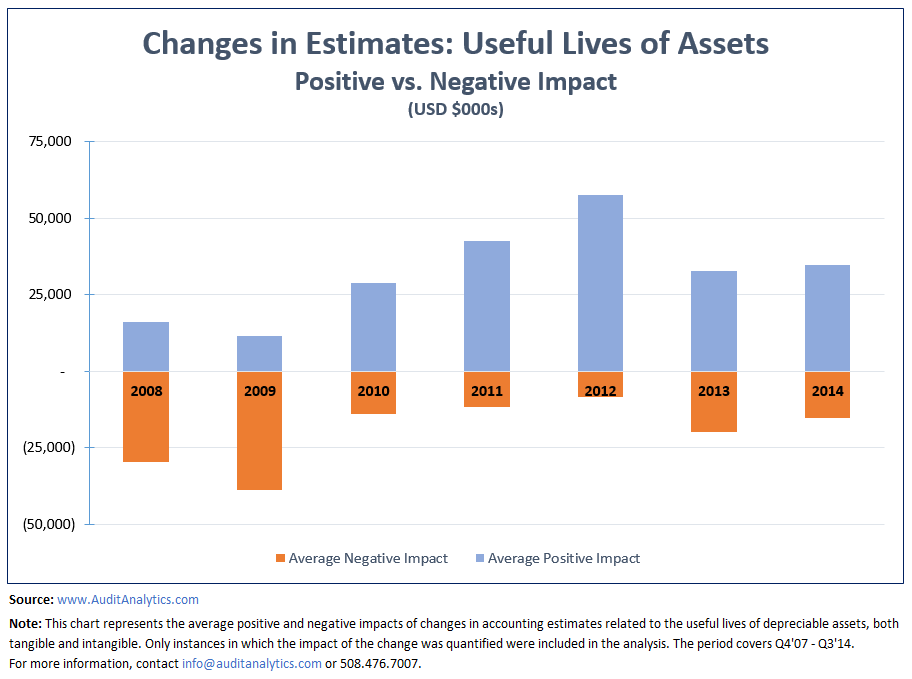 In a follow up to this post, we will look at some examples, and investigate to what extent these changes have had a material impact on earnings, especially relative to earnings forecasts.