Some time ago, we looked at how US companies would measure up against the new non-audit services fee cap in effect in the European Union.

In the major EU audit reform of 2014, one of the stipulations includes a cap on fees for permitted non-audit services (NAS). Going forward, fees for non-audit services cannot exceed 70% of the average of the entity’s audit fees over the past three years.

2.  When the statutory auditor or the audit firm provides to the audited entity, its parent undertaking or its controlled undertakings, for a period of three or more consecutive financial years, non-audit services other than those referred to in Article 5(1) of this Regulation, the total fees for such services shall be limited to no more than 70 % of the average of the fees paid in the last three consecutive financial years for the statutory audit(s) of the audited entity and, where applicable, of its parent undertaking, of its controlled undertakings and of the consolidated financial statements of that group of undertakings.

In that analysis, we compared fiscal 2014 non-audit fees to a three-year average of audit fees for 2012-2014 for each of the Russell 3000 companies. The vast majority of companies fell under the cap. 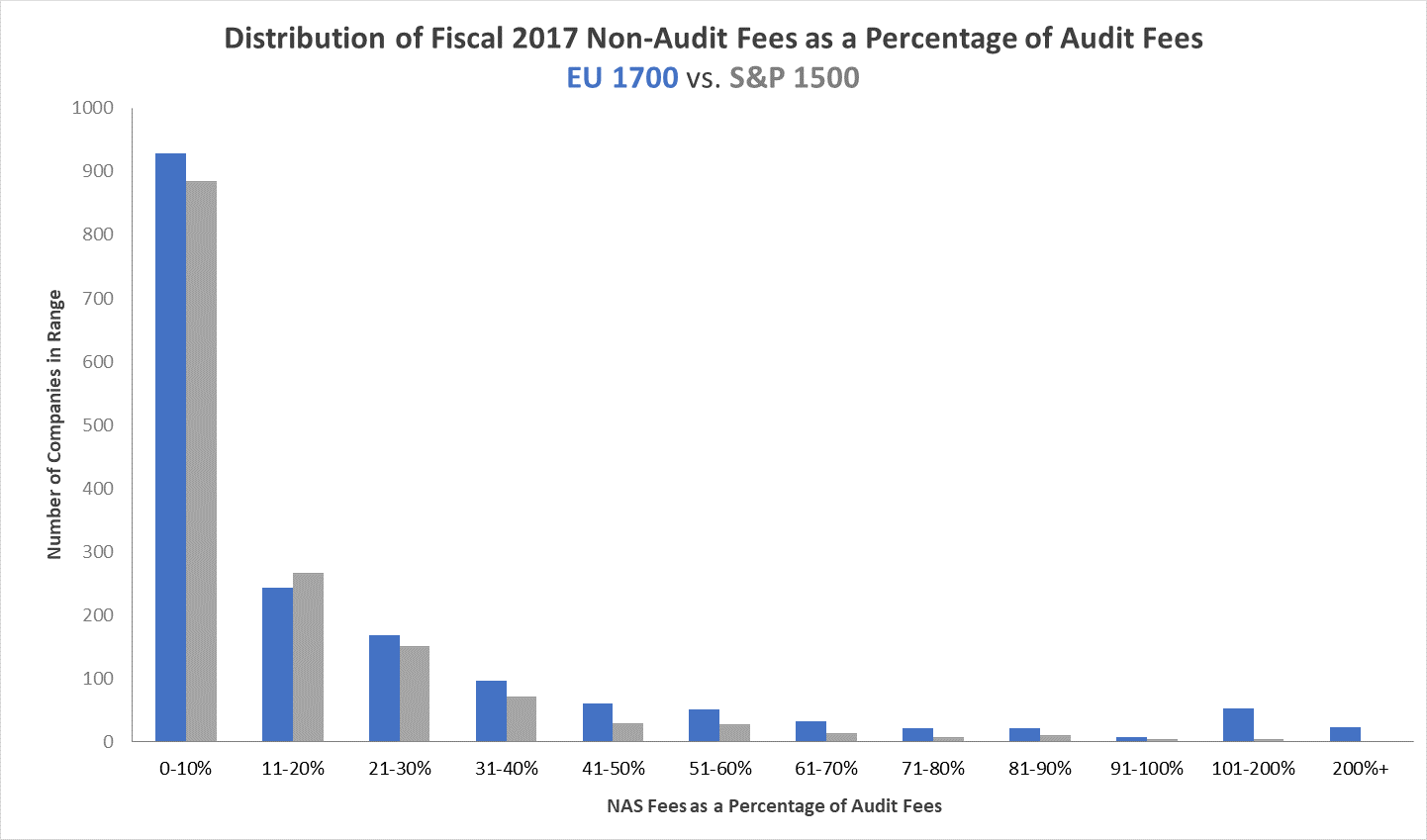 For purposes of this analysis, we combined audit and audit-related fees, with the remainder of the company’s total fees counting as NAS fees. Further, where a company had a joint-audit, we combined the fees for both audit firms.

In both the US and across Europe, the vast majority of companies fall below the 70% fee cap, with the largest chunk of companies having non-audit fees fall in the 0%-10% range.

It’s important to note that this is a simplified analysis. The actual rules of the 70% fee cap are very complicated. One of the major complications is that, typically, the cap only applies to the Member State affiliate firm (e.g., KPMG Germany), and not to the other firms in the network. This analysis is based on the fees for the firm network as a whole.

Further, this analysis only compares 2017 audit and non-audit fees. The cap is based on an average of the past three year’s audit fees. All that is to say, it is unlikely that many – if any – of the companies that fall above the 70% range in the analysis above are actually non-compliant with the regulation. Nevertheless, this analysis gives a rough picture of the relationship between audit and non-audit fees between the US and a wide range of European countries.