Note: This blog has been modified from its original version to clarify the distinction between reports that reached a “conflict-free” determination based on RCOI alone versus those that were based on an IPSA.

This past spring marked the third year that Form SD Conflict Minerals disclosures have been available. Established in 2010 as part of the Dodd-Frank Section 1502 initiative, the filing requirement was intended to help alleviate concerns that proceeds from the sale of certain minerals could be used to benefit militant groups in war-torn regions of Africa.

The original rule was subsequently challenged by a number of trade associations. Their major objection, on First Amendment grounds, focused on the initial requirement to label a company’s products as either “DRC Conflict Free” or “DRC Not Conflict Free”. Recently, on March 4, 2016, the SEC decided not to pursue the appeals process any further. As it stands, companies do not have to disclose definitively whether their products are “DRC Conflict Free” or not. From a practical perspective, the end of the dramatic multi-year litigation may have provided companies some relief, but in the end it did not exempt them from filing Form SD. 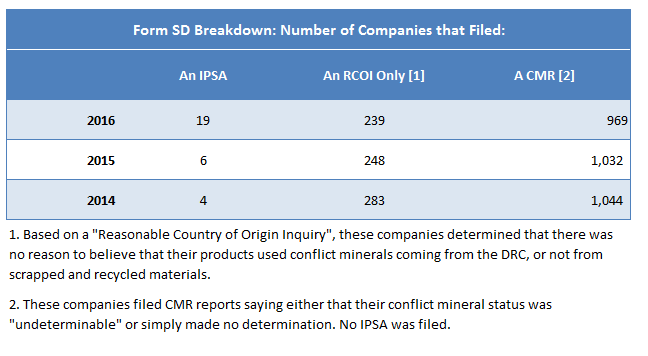 SEC guidance from 2014 states that only companies that (now voluntarily) elect to disclose “DRC Conflict Free” status are required to file an independent private sector audit (“IPSA”). As expected, given the voluntary nature of the disclosure and the additional compliance costs associated with claiming conflict free status, 79% of companies stated that the status of products was either “undeterminable” or that there were unable to reach a determination.1

Of the companies that said their conflict mineral status was undeterminable, many cited implementation challenges such as not receiving responses from all suppliers. Yet, even companies that were able to achieve 100% response rates still often declined to declare DRC status. For example, in its most recent Form SD, Apple disclosed that it had reached the milestone of obtaining an 100% audited supply chain. Nevertheless, Apple did not make a DRC status determination, and neither did it obtain an IPSA.

In 2016, only 19 companies (about 1.8% of all Form SD filers) provided IPSAs. While this is a substantial increase relative to the four IPSAs filed in 2014, the number is still very low.  Of the 19 companies to provide an IPSA, seven were “Conflict Free,” five were dual determination (some products, but not all, were found to be conflict free), and seven were unable to reach a determination. 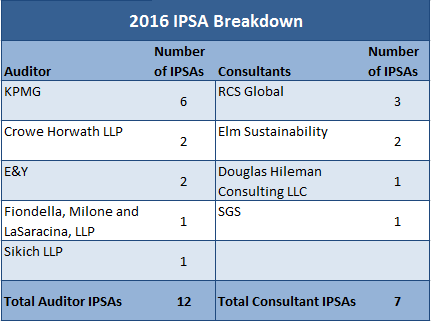 An interesting note found on the Elm Consulting website indicates that while only two of the firm’s opinions were issued, the company conducted a third IPSA that was not filed in a CMR report.

A number of other companies indicated that they had engaged outside consultants to provide other conflict mineral services, but not necessarily an IPSA. Ten companies noted that they had engaged Crowe Horwath for various (non-audit) conflict mineral services and while two noted that they used PwC for similar services. The takeaway here is that SEC filings probably do not reflect the true number of CMR services being performed, and that the number of IPSA reports is expected to increase in upcoming years.

Companies are also implementing stronger due diligence processes. At least 112 companies said that they received 100% response rates from suppliers. In addition, many companies have begun removing from their supply chains smelters and refiners that are unwilling to submit to an independent third party audit.

For instance Netscout Systems directed its suppliers to remove two smelters from their supply chain. Others, such as Cardinal Health, encouraged their suppliers to consider using validated smelters that are certified as “DRC conflict free” as alternative sources of conflict minerals.

Recent international developments put additional pressure on global companies. In mid-June, the EU Commission reached an agreement that extends conflict mineral rules even further than Section 1502 of Dodd-Frank, covering essentially every country in the world, as opposed to just a selection of African countries.

As well, a recent CFA institute survey indicated that 69% of institute members see benefits in independent verification of ESG disclosures. AICPA expectations fall in line with that assessment, estimating that the ESG assurance market will increase 11% by the end of 2017.

To summarize, NAM vs. SEC provided some challenges to the IPSA requirement. Yet, given increased investor attention to the CSR disclosure, and arguably, conflict minerals is an integral part of good corporate citizenship, we expect most companies to eventually file audited CMR reports.

1. There may not seem like much of a difference between these two clauses. The reason for the distinction is a little complicated and technical. The SEC originally implemented a transitional period that allowed companies to use the “undeterminable” status until the Dodd-Frank requirements were set to go into full effect. That transitional period expired in 2016 for all but smaller reporting companies. However, given the court ruling – and the SEC’s decision to forego further appeal – companies are not required to disclose any definite conflict mineral status. Thus, there is no specific language that companies are required to use to describe the status determination or lack of thereof. So, although the “undeterminable” language technically expired, it is not clear if companies are therefore prohibited from using that language.↩