General Electric (GE) stock reached a new low of $16.02 on January 19, 2018, continuing the 2017 downtrend into 2018. The slide followed an announcement that the company has completed a comprehensive review of its insurance portfolio. The review was initiated in mid-2017 and involved re-evaluation of actuarial assumptions behind the long-term care legacy reinsurance business. Following the completion of this review, GE has taken an after-tax charge of $6.2 billion.

Here is an excerpt from the conference call transcript: 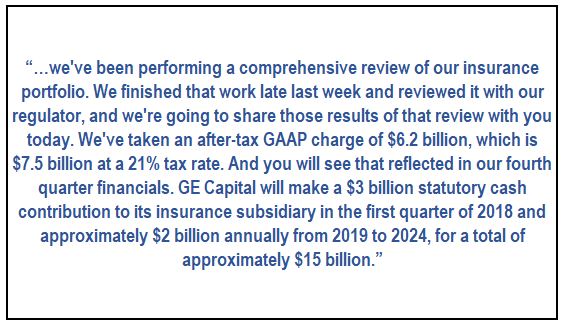 Long-term care insurance is a small legacy part of GE’s portfolio, and no new business was originated after the year 2006. Overall, GE holds only 4% of the long-term care reinsurance market.

The review of business always carries the risk of unexpected findings, yet the magnitude of the $6.2 billion charge is far more staggering than the $3 billion that the market anticipated.

Increasing claims trends (along with low interest rates that reduce returns on investments) have, for years, presented challenges for both insurers and reinsurers in the long-term care sector, so changes in the actuarial assumptions should not be that uncommon.

The GE charge prompted us to take a closer look at other companies that disclosed changes in the long-term care reserves. From an accounting standpoint, changes in claim reserves are often disclosed prospectively as changes in accounting estimates. The disclosure rule applies only to material adjustments – disclosure of routine immaterial changes is not required.

Audit Analytics identified 30 insurance companies and 60 changes in accounting estimates related to the modifications of the loss reserves filed since 2004.1 Here are the top five:

We looked at the entire insurance industry, so naturally many of the adjustments are likely to be related to products other than the long-term care market (for example: worker compensation claims). Yet, we found a few interesting examples:

In lay terms, the periodic reviews of claim reserves are common, and charges are expected. Since 2004, Genworth Financial disclosed seven similar changes in estimates, totaling $3.8 billion.

In this example, as in the previous one, we see a periodic review of the underlying assumptions which resulted in a prospective adjustment to the recorded liabilities. As we can see from the table above, China Life Insurance recorded six changes in estimates that in total exceeded $5 billion.

So why then, did some companies disclose reserve-related changes in estimates over the last decade, and others did not? Changes in actuarial models (such as mortality rates and discount rates) that result in material changes need to be disclosed. For routine, immaterial quarterly updates we may not find any disclosure.

Also, it is worth noting that a company may seem to interpret a change in estimate as the output of an estimating model. E.g., we may see a year over year difference without a change in the model. That could also be material, if say the company’s claims payout increased dramatically after increase in the number of policies sold. And sometimes
companies whose financial reporting depends hugely on estimates will make disclosures about just the simple change in the output. We generally don’t view those as legitimate changes in accounting estimates.

The issue with GE’s charge, of course, is not only the magnitude, but also the need to reserve $15 billion to increase the statutory capital reserves. The contribution, in turn, may put some liquidity pressure on the company and limit funds available for other purposes.

In a sense, issues with the insurance subsidiary are just another confirmation to our previous argument: if a company needs four distinct EPS to describe its business, the business is too complex to fully understand. Impairments and onetime charges rarely go alone. When such a complex conglomerate is breaking up, re-evaluating every segment and every line of business is likely to surface additional surprise findings.

Note: This article was previously available to our FactSet subscribers.

For more information, or for a complete list of insurance companies and changes in accounting estimates related to the modifications of the loss reserves filed since 2004, email us at info@auditanalytics.com or call (508) 476-7007.