Investors and analysts should be aware that there is more than one way to disclose Changes in Accounting Estimates. In some cases, inconsistency in the disclosure practices make it difficult to predict whether a review or an investigation is likely to result in significant negative consequences.

In the case of General Electric [GE], the signs were there – the company disclosed a special, non-routine review of reserves that followed a negative payout trend. The combination of these factors was a clear of a material charge (as discussed below, routine immaterial charges are not likely to be disclosed); and considering the size of the company – the “material” is likely to be expressed in billions.

The insurance business operates around risks and estimates. Insurance companies assess the risks and make estimates based on this assessment. They then use those estimates to price their policies and make decisions on the amount of reserves needed to cover potential claims. Assessing risks and making estimates is never easy, but even more so in a changing environment and/or over an extended period. The recent $6.2B insurance-related charge taken by GE that sent the stock down sharply comes as an illustration to the severity of the consequences of underestimating the risks.

A recent MarketWatch article provides a good outline of the overall complexity of the problem while explaining why GE’s portfolio is a special case and may not be comparable to other insurance companies. The problems GE encountered may be attributed to a lack of claims history with this book of business, with 40% of claims occurring in the past 2 years. That would explain why we did not see changes in reserve estimates since 2004 when GE spanned off their Genworth [GNW] unit.

This brings us to a more general issue: when looking at different companies’ disclosure of changes in loss reserves, are we really comparing apples to apples? What are the regulatory requirements and how are the changes in reserve estimates disclosed? The discussion below is equally applicable to changes in estimated long-term care reserves, as well as other insurance-related reserves.

In terms of the disclosure of changes in estimates, ASC 250-10-50-4 prescribes that there is no need to disclose immaterial and routine changes, however if a change is material, impact on income from continuing operations, net income (or other appropriate captions of changes in the applicable net assets or performance indicator), and any related per-share amounts of the current period shall be disclosed.

In practice, we see certain discrepancies in how changes in estimates related to loss reserves are disclosed.

A “Change in Estimate” is typically interpreted to mean a change in the actual estimating model – for example, a company would change the actuarial assumptions such as mortality or discount rates. In that case, the impact would be the difference between using the new model versus the old model, all else being equal. The change in estimates would typically be disclosed in Critical Accounting Policies of the MD&A, Loss Reserves footnote or as a separate Changes in Estimates footnote.

Since 2004, 30 insurance companies disclosed 60 changes in the loss reserve estimates. We looked at the entire insurance industry, so naturally many of the adjustments are likely to be related to products other than the long-term care market (for example, worker’s compensation claims).

Below is list of the top 5 companies, by aggregate impact on pre-tax income. (We typically include only changes made to comply with ASC 250 in our Changes in Accounting Estimates database).

In the example below, the charge was disclosed in the Liability for Policy and Contract Claims footnote, as well as in the MD&A section: 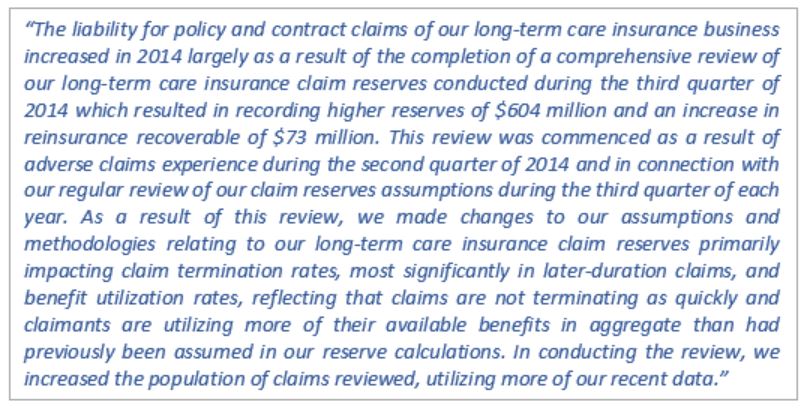 The review process above is described as a “comprehensive review” that was commenced following “adverse claims experience”. This disclosure is in line with what we’ve seen with GE – e.g, GE described the claims as “elevated” and launched a review that extended beyond the routine annual testing.

In some cases, we see implicit changes in estimates disclosed in the Results of Operations. It is not always clear whether this disclosure was made to comply with ASC 250-10-50-4 requirements or to simply explain why certain accounts increased/decreased from the prior year.

An example of these borderline cases is provided below. Arguably, even if the change mentioned does fall under ASC 250, it is not immediately apparent whether the charge was material.

Sometimes, though, a company may seem to interpret a change in estimate as the output of an estimating model. For example, the year-over-year difference in the actual loss reserve itself, without a change in the model. This could also be material, if say, the number of policies sold increased dramatically. In other cases, companies, whose financial reporting relies heavily on estimates, will make disclosures regarding only the simple change in the output. We generally don’t view those as changes in accounting estimates subject to ASC 250 because the change was not based on the new available information.

Perhaps the most intriguing part of the disclosure is the one that we could not identify. As we discussed in our previous article, some companies routinely disclose changes in loss reserves, while other companies do not.

So, what would cause such a discrepancy? One possible explanation is that, as in the GE case, changes in estimates are required to be recorded only if new information (including changes in claims patterns) becomes available; and the disclosure is required only if such a change is material.

We do not necessarily see disclosures related to changes in reserve estimates as an accounting concern. In fact, it’s quite the opposite – in many cases such a disclosure adds clarity and transparency.

The discrepancy in disclosure, in practice, extends beyond ASC 250. Some companies would disclose every small detail, including the process that triggered the re-evaluation and the specific amounts of each change. Others, however, may be much less specific. For example, in some cases, the description of the case was so generic that we found it hard to determine whether the charge was related to long-term care insurance or to a different part of the business.

The overall complexity of loss reserve estimates and their disclosure is reflected, among other things, in the nature of the SEC comment letters. (SEC comment letters are routine Corp Fin reviews and should not be confused with SEC inquiries or investigations.)

Since 2006, at least 150 insurance companies have received SEC comments related to loss reserves. In several cases, the focus of the SEC review was changes in loss reserves estimates and the new information that triggered the change.

A version of this article was previously available on FactSet to subscribers of our Accounting Quality Insights. To request a complete list of companies with changes in loss reserve estimates, email us at info@auditanalytics.com or call (508) 476-7007.