While reviewing the results of our recent annual report on financial restatements, we noticed an interesting – although not unexpected – trend. Restatements are most commonly disclosed in the spring. 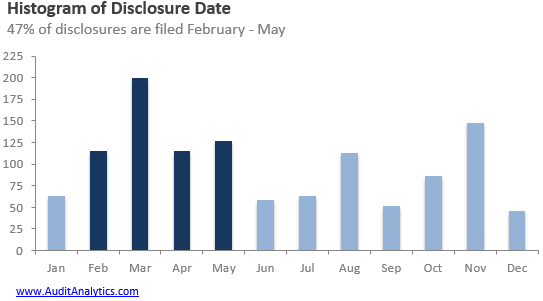 A look through 8-K Item 4.02 Non-Reliance disclosures made between 1/1/11 and 12/31/15 show that 47% of them are filed between February and May. As we noted above, this result is not entirely surprising. The data suggests what one might have guessed, namely, that the majority of material errors are found during the year-end close process.

We know that company management often plays an active role in the discovery of accounting issues during the internal review of specific transactions or areas of accounting. Auditors, too, can uncover misstatements during their year- or quarter- end audit and reviews. Given that, it makes sense that financial restatements are most frequently disclosed in the spring, when companies are preparing their annual reports and auditors are performing the bulk of their field work.

But a look through our databases shows that other sources can help uncover material misstatements. In particular, questions and reviews by the SEC and PCAOB sometimes reveal accounting issues.

During the review process of the registrant, the SEC issues comment letters to address areas of concern.

After receiving a comment letter from the Securities and Exchange Commission (the “Commission”) in connection with standard periodic reviews by the Commission of our Form 10-K for the Fiscal Year Ended March 31, 2015..we conducted further reviews of our financial statements.

As a result of the determination to restate these previously issued financial statements, management is in the process of re-evaluating the effectiveness of the design and operation of the Company’s internal control over financial reporting and disclosure controls and procedures.

Similarly, but less frequently, the PCAOB can also identify accounting issues during their inspections of audit firms.

Item 4.02 Non-Reliance on Previously Issued Financial Statements or a Related Audit Report or Completed Interim Review.
On December 8, 2015…during a regular Public Company Accounting Oversight Board (“PCAOB”) inspection of the Auditor, the PCAOB issued certain comments that certain audit deficiencies were identified in the Company’s Annual Report on Form 10-K (the “Original 10-K”) for the year ended December 31, 2014…

The Audit Committee of the Board of Directors and the executive management have discussed the subject matter with the Auditor and concluded that the financial statements and/or the related audit report…should no longer be relied upon.

Interestingly, we see in the chart above that there is another spike in restatement disclosures in November, along with another smaller spike in August. Those are likely tied to quarterly reviews, but perhaps further investigation would be warranted.

For more information about our databases related to financial reporting issues, or to request a copy of the full report, please email us at info@auditanalytics.com or call (508) 476-7007.