It’s already the end of April, with Christmas just a distant memory. And if you are anything like us, you’ve probably lost track of that gift card or two you weren’t able to use right away (or add to some smartphone app). Luckily for us, most gift cards these days don’t expire, so if you do happen to find an old card you’ll still be able to redeem it. While a potential boon to the consumer, the indefinite nature of gift cards can present a challenge to the accounting departments of the companies selling them.

Gift cards are essentially a sale in advance. At the time of purchase, the company is making a deal to give to the bearer of the card an amount of goods equivalent to the amount of money on the card. The transaction, and the unused value, is considered a liability until the card is used. But what about all those cards that never end up getting used?

FASB recently issued some new guidance on this issue. While the liability associated with any particular gift card never really goes away, it is clear that some gift cards are simply never going to be redeemed. So companies are allowed to recognize the revenue associated with those cards when the likelihood of redemption is determined to be remote. The eventual recognition of this unredeemed amount is referred to as breakage income, an accounting estimate normally calculated based on historical patterns.

Consider this: Cardhub.com estimates that total US gift card sales were over $130 billion in 2015. In its most recent 10-K, Nordstrom disclosed that its breakage rate is approximately 3% of issued gift cards – a not uncommon policy. Now, applying the retailer’s breakage rate to 2015 gift card sales, we estimate that from 2015 sales alone almost $4.0 billion worth of gift cards will go unused!

The following table shows a few examples of breakage income, as disclosed in 2015 annual financial statements.

As previously mentioned, the amount of breakage a company chooses to recognize is an accounting estimate, which, if significant, is usually described in the “Critical Accounting Estimates” section of the MD&A or the “Significant Accounting Policies” footnote.

Typically, the estimate is based on historical redemption patterns. For example, Nordstrom disclosed a breakage rate of approximately 3% of issued cards, Guess Inc. approximates between 5.7% and 4.7%, and Ruby Tuesday determined that substantially all customers use their gift cards within two years of purchase, so begin to recognize breakage after 24 months.

Should there be a change in historical redemption patterns, in industry practices, or methodology, a company may decide to make a change to their breakage estimates. (See ASC 250-10-20.) Nordstrom, for example, might determine that 3% is too low, and change its breakage rate to 5%. Such a change in accounting estimate results in an adjusting entry that can sometimes have a material impact on earnings. The table below shows a few companies who have made significant changes in gift card breakage estimates. You’ll recognize a couple companies from the previous table. 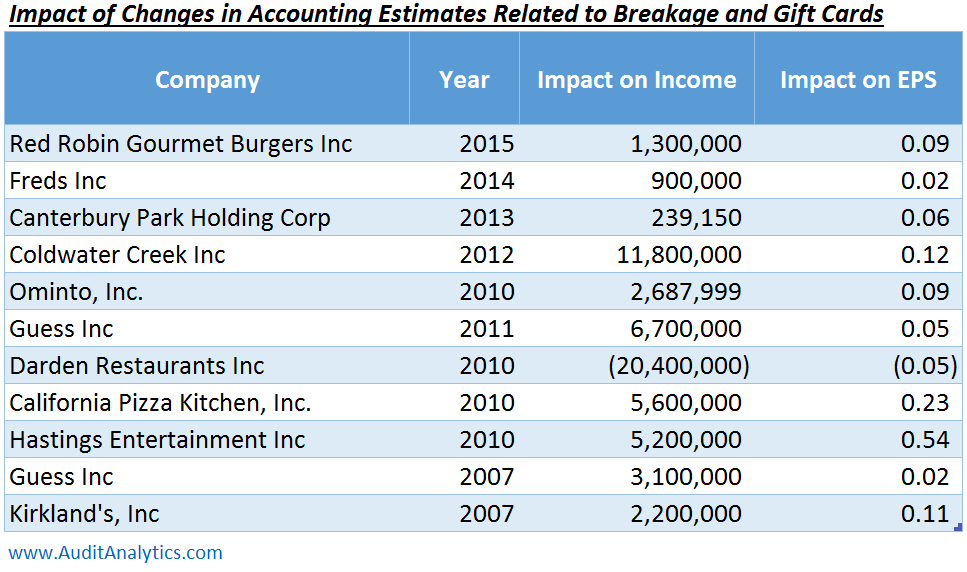 Red Robin made such a change in April 2015, indicating in their 10-Q that they “re-evaluated the estimated redemption pattern related to gift cards and aligned the recognition of gift card breakage revenue to the updated estimated redemption pattern. As a result, the Company recognized $1.4 million of additional gift card breakage revenue in the first quarter of 2015.” The Red Robin change ultimately increased fiscal 2015 EPS by $0.09.

That is far from the largest impact a change in breakage estimates has had on EPS in our dataset. Hastings Entertainment Inc, now a private US retail chain (purchased by Draw Another Circle LLC in 2014), made a change in 2010 that boosted EPS by $0.54, an increase of over 300% without the change.

Changes in Accounting Estimates are one of the many quality-of-financial-reporting data-points that we track in our Accounting Quality + Risk Matrix. We’ve discussed before the massive impact such accounting adjustments can have on earnings figures. (Perhaps unsurprisingly, the impact of estimate changes are overwhelmingly positive.) Interestingly, these adjustments are often not discussed in earnings releases or in earnings conference calls (Netflix provides one recent example). Nevertheless, changes in accounting estimates can clearly have an impact on earnings and on comparability, and any user of financial statements would benefit from transparency and disclosure.