Interest in non-GAAP disclosure is on the rise among sophisticated investors and analysts. While everyone looks at non-GAAP in their own specific way, there are certain aspects of non-GAAP disclosures that most people could agree on. First and foremost, there is nothing inherently wrong with using non-GAAP metrics to supplement required reporting. Non-GAAP generally allows investors to see the business through the eyes of the management, thereby gaining a better understanding of the inner workings of the company.

We have written before that the non-GAAP section can be an early indicator or snapshot of emerging business issues and bottom-line pressure points. When assessing non-GAAP disclosures, we make use of the following (not comprehensive) outline to identify really significant elements.

As a traditional brick-and-mortar retailer, GNC would not seem like a likely candidate for unusual non-GAAP disclosures, but their annual report stood out to us for reasons we will explore below. But first, some background.

Over the past few years, GNC has been aggressively opening new stores, bringing their total store count from around 7,000 in 2010 to almost 9,000 in 2014 (including both company-owned and franchise stores). The nearly 30% growth over that time frame may very well coincide with a broader increase in health and fitness trends in the United States, but it still represents an impressive expansion. (To give some context, Vitamin Shoppe increased from 484 stores in 2010 to 717 in 2014; an increase of 48%, but with much smaller absolute numbers.) The company also authorized $500 million share repurchase, $407 million of which was still outstanding at the end of the Q4 of 2014.

GNC, together with Walgreens, Walmart, and Target, recently came under the spotlight when the New York attorney general launched an investigation concerning certain ingredients in their branded supplements. Some supplement families were taken off the shelves, and only last week, after reaching an agreement with the AG, was GNC permitted to put them back out for sale.

The agreement with the attorney general did not come free: as part of the agreement, GNC agreed to more rigorous testing standards (that would probably carry some additional costs to the company). The products in question were found to be compliant with FDA standards; but in the aftermath of the GNC probe, a group of 14 attorneys general called for additional regulation of the supplements industry.

Now that we understand the context, let’s take a look at the latest GNC reports through the prism of non-GAAP as outlined above. Below is the non-GAAP section as presented in 8-K Item 2.02 filed 2015-02-12. 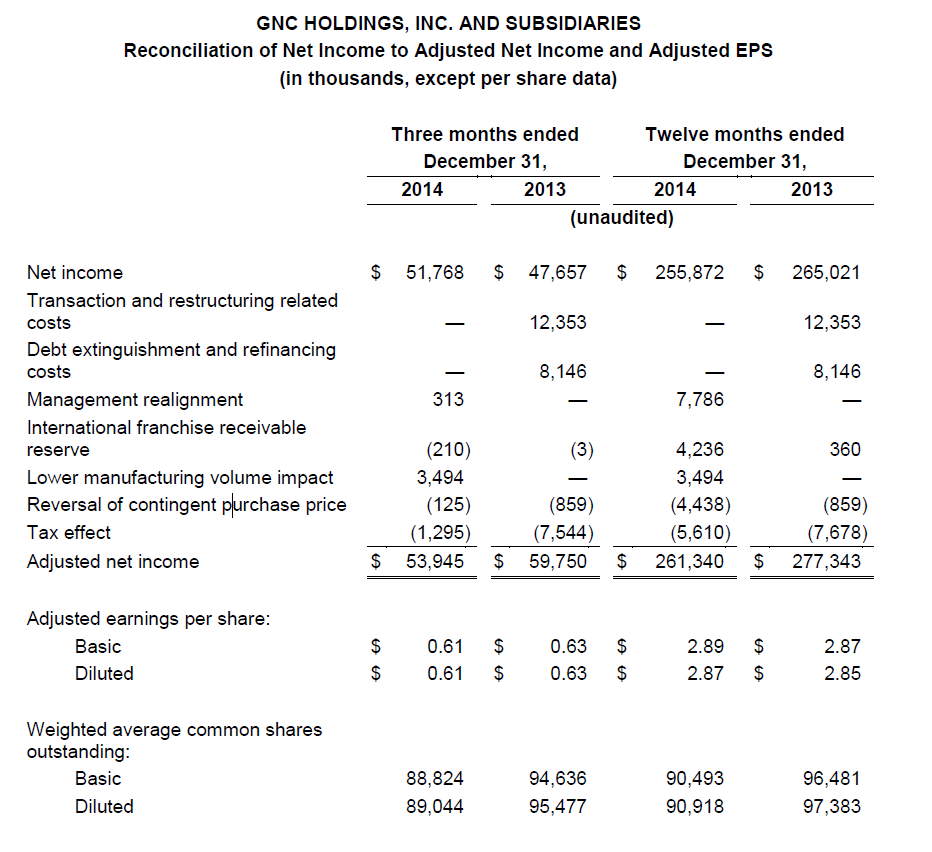 As we can see from the table above, in 2014 GNC presented four different reconciling items to arrive at Adjusted Net Income: management realignment, international franchise receivable, reversal of contingent consideration, and lower manufacturing volume impact. The first three items were originally introduced in Q3 2014, while the lower manufacturing volume adjustment was referenced as a note in the outlook section, estimating a Q4 and full-year inventory-related charge of $0.03 per share.

Some hints about the nature of the charges could be found in Note 2 of the annual report filed 2015-02-17. According to the company, the “management realignment” charge was associated with changes among the executive team and comprised mostly of severance payments and recruiting charges. During 2014, GNC saw significant executive turnover, including resignations of the Corporate Controller, CFO, CEO, Executive VP of Business Development, Chief Merchandising Officer, and Chief Legal Officer. Audit Analytics consistently tracks directors and officers changes and consider them notable events in the Audit Analytics AQRM model.

Let’s look at each adjustment in greater detail.

Interestingly, severance-related disclosure was raised in one of the SEC comment letters, dated July 25, 2013:

3. We note the disclosure in your discussion and analysis of operating income on pages 51 and 54 of operating income excluding transaction related expenses and executive severance.  As this measure appears to be a non-GAAP financial measure as defined in Item 10(e) of Regulation S-K, please tell us your consideration of providing each of the disclosures required by Item 10(e)(1)(i) of Regulation S-X.

Response:  The Company believes that operating income excluding transaction related expenses and executive severance is useful to investors for period-to-period comparison of results because it highlights non-recurring, infrequent or unusual items that (i) did not affect the Company’s performance in previous periods and (ii) we do not expect to materially affect the Company’s performance in future periods. The Company’s discussion under the heading “Operating Income” included the components of operating income excluding transaction related expenses and executive severance in a manner that would allow a reader to reconcile the non-GAAP measure to operating income.  Specifically, in the discussion beginning on page 51, the Company noted that “consolidated operating income increased … to $427.9 million for the year ended December 31, 2012,” and, under the same heading, explained that it had recorded executive severance expense of $3.5 million and transaction and strategic alternative related costs of $1.9 million for the period.  The explanation of changes in operating income beginning on page 54 contained similar information for the fiscal year ended December 31, 2011.  As the discussions referencing the non-GAAP measure also expressly cited the most directly comparable GAAP measure and each element of the reconciling information, the Company did not believe further presentation of a reconciliation was required.  Nonetheless, the Company acknowledges the Staff’s comment and, in future filings to the extent that it includes a non-GAAP financial measure, will provide enhanced disclosure regarding such measure, including the reasons that management believes the presentation of such non-GAAP measure provides useful information to investors, consistent with the requirements of Item 10(e)(1)(i) of Regulation S-K.

Reversal of the contingent consideration charge of about $4 million was related to the risk that the acquired companies would not be able to meet some of the contingencies:

Perhaps the most interesting of the four items, lower manufacturing volume impact, was the only one not discussed in Note 2. But we can look at Note 3 to understand GNC’s inventory composition:

There was a sharp drop in work-in-process and raw materials. While this drop is consistent with the inventory alignment attempts discussed in the Q3 and Q4 press releases, the 2014 finished goods inventory balance is still above its 2013 level, with virtually flat revenue.

Some other notable 2014 items include a $9.9 million gain on sale of stores, and $3.0 million of net discrete tax benefits related primarily to the reduction of valuation allowances and certain state tax positions.

Other (income) expense, net. Other (income) expense includes the gain on sale of company-owned stores to franchisees and foreign currency transaction (gain) loss. During the years ended December 31, 2014, 2013 and 2012 the Company sold 26, 9 and 10 company-owned stores to franchisees, respectively, resulting in gains of $9.9 million, $2.7 million and $0.8 million.

In the fourth quarter of 2014, the Company’s effective tax rate was 32.6%, which includes $3.0 million of net discrete tax benefits related primarily to the reduction of valuation allowances and certain state tax positions.

So, if most of the disclosure is available in the annual report, why would investors be interested in the non-GAAP section? As we have seen, the non-GAAP section presented many of the key business challenges (such as management turnover, deteriorating business conditions in one segment, and rising inventory) all in one table.