For the vast majority of Russell 3000 companies, the deadline to adopt new revenue recognition accounting guidance is fast approaching. Some issuers, however, have more than another whole year to prepare.

ASU 2014-09, “Revenue from Contracts with Customers” (codified as ASC 606) – a potentially disruptive new standard – becomes effective for fiscal years beginning after December 15, 2017. Of the Russell 3000, 25 companies have already adopted the standard, and a few more may adopt by the end of the year. But most of them are expected to have to adopt the new standard this upcoming January. That’s because about 80% have fiscal year ends on or around December 31.

For the remaining 20% of issuers, the adoption date depends on their fiscal year. Since the standard is effective for fiscal years beginning after December 15, 2017, companies that close their annual books on, say, November 30, 2017, won’t have to implement the new standard until their next fiscal year, late in 2018. These companies – there are five of them – will get almost a full additional year to conform to the new accounting practices. 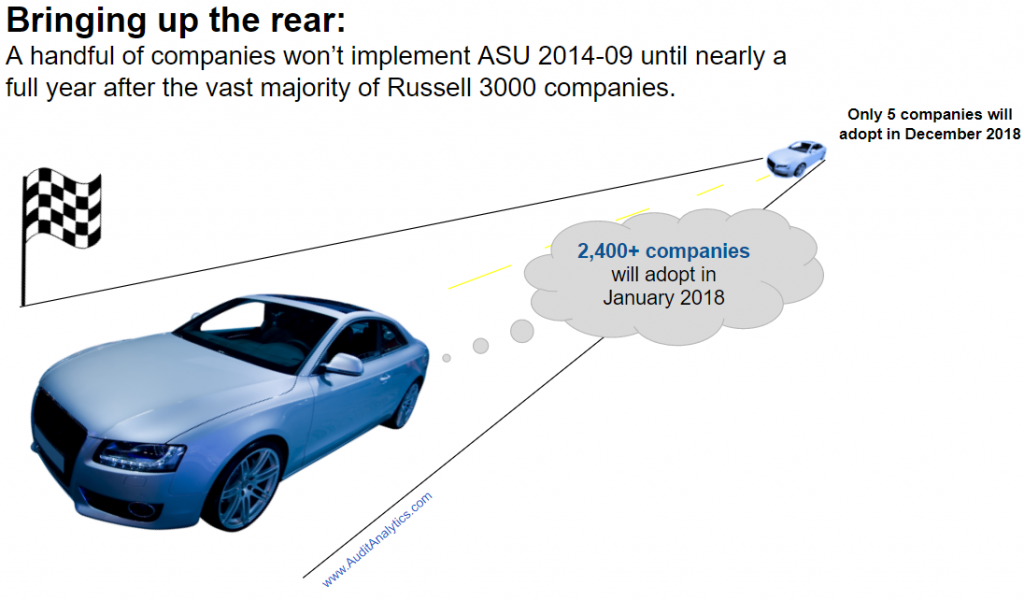 The benefits of the extra few months could be quite tangible. First, there is simply more time to get things right. Further, “late” adopters would have more information at their disposal and would be able to avoid potential implementation pitfalls that some of the early adopters may face.

Based on the adoption disclosures we’ve seen so far, companies both large and small are equally likely to delay the adoption to the latest date permitted by the rule. For example, let’s look at Apple Inc. Apple’s fiscal year ends on September 30th, and the company plans to adopt the standard in October 2018. That’s more than a year after rival tech giants Alphabet and Microsoft would have adopted the standard. (Notably, Apple did initially plan to adopt early, but at some point along the road changed its mind.)

From a practical perspective, then, adoption of this new standard is going to be spread out over two years, and companies with later year ends will have the advantage of seeing what everyone else does before they have to disclose their new revenue numbers. Why are these points so noteworthy?

The reason is quite simple. ASU 2014-09 is going to bring major changes to the way in which companies recognize revenue, and comparability of results between companies is likely going to be significantly affected. Investors will have to go back and forth between new and old GAAP in order to understand the differences. Discrepancies in the timing of adoption may present additional challenges. For example, in order to compare two companies in the same industry with different fiscal year ends, it will be necessary to understand when ASU 2014-09 is going to be adopted and, for the company that did not yet adopt, take into consideration the expected impact of the standard.

As we discussed above, expected adoption dates closely correlate with the fiscal year ends. Overall, roughly 80% of Russell 3000 companies are planning to adopt ASU 2014-09 in January 2018. Another 8% will adopt between February and June 2018, and approximately 10% on or after July 1, 2018.

Prepackaged software (SIC 7372) is a good example to illustrate the comparability issue. Out of the 91 companies in the prepackaged software sector, 3 companies (Microsoft, Medical Information Systems, and Commvault Systems) already adopted the standard. 56 companies (or slightly more than 60%) are planning to adopt in January 2018, 21 companies (or 22%) in February 2018 through June 2018 and the remaining 11 companies in July 2018 or later. For most of these companies, the adoption is likely to change the way revenue and expenses are recognized. For example, prepackaged software companies will no longer be required to identify Vendor-Specific Objective Evidence (VSOE) for undelivered elements of a contract. Instead of recognizing revenue for specific elements of the contract, a portion of the revenue will be recognized upfront, with the remaining revenue recognized ratably over the life of the contract.

So, in January 2018, we will see an unwelcome split – about 60% of the companies will report under the new GAAP, while the remaining 40% will gradually move to the new standard through the 2018.

The final example is eating and drinking places (SIC 5812). Out of 41 companies, 30 are planning to adopt in January 2018, 5 plan to adopt in February through Ju

ne 2018 and 6 plan to adopt in July through December 2018. Eating and drinking places anticipate the adoption to impact the pattern of recognition for breakage revenue, as we discussed in an earlier blog.

To summarize, adoption date is another point that investors need to keep in mind while evaluating impact of the standard. Looks like 2018 earning season is going to be a lot of fun – stay tuned for more analysis!