As Russell 3000 public companies with December year-ends implement the new revenue recognition standard, we are beginning to see a pattern – smaller companies provide fewer details and generally are not as prepared as larger companies. Smaller companies may lack resources to make timely accounting changes, resulting in an implementation lag and significant issues, including restatements and control weaknesses.

Looking at 2,803 Russell 3000 companies that referenced ASC 606 in Q4 financial statements, (we focused on S&P 500 companies in a previous post), we considered several factors when assessing a company’s implementation process, as discussed below.

Adoption Method Used: In Q4, 84% of the companies evaluated disclosed their adoption method, either the full retrospective or the modified method. Companies using the full retrospective method are restating all revenue and expenses for the prior period. In the modified method, companies adjust retained earnings in the current period and recognize revenue under ASC 606 going forward.

Control Weakness: 30 Russell 3000 companies already disclosed material weaknesses and ineffective controls related to the implementation of the new rule. This number is expected to increase in future periods.

Revenue streams and specific areas of accounting affected: Most of the companies identified at least one area of accounting affected. Some areas of impact, such as gross vs. net presentation, were common in most of the industries and sectors. Other revenue streams are industry specific. Although companies in similar industries were expected to provide similar disclosures, we found interesting variations.

Other impacts: Even companies that described their implementation stage as “substantially complete” may still have some open issues. About one-third of all companies disclosed some remaining implementation issues; the most common remaining topic was impact on controls and procedures.

Completion stage: Overall, 66% of the companies described their implementation efforts as “substantially complete”. By now, every company should be ready to adopt the standard, but not surprisingly, larger companies appear to be further ahead with the implementation process.

Outlook: Because of where many of these companies are in their implementation process, we expect to see more issues related to adoption. As more companies disclose impact and make progress, the nature of disclosures is likely to change as companies incorporate additional information.

A few years down the road, it will be interesting to see whether a correlation exists between the pre-adoption disclosure and level of detail, and post-adoption implementation issues such as restatements and control weaknesses.

The full version of this article was first available on FactSet to subscribers of our Accounting Quality Insights. For more information, email us at info@auditanalytics.com or call (508) 476-7007. 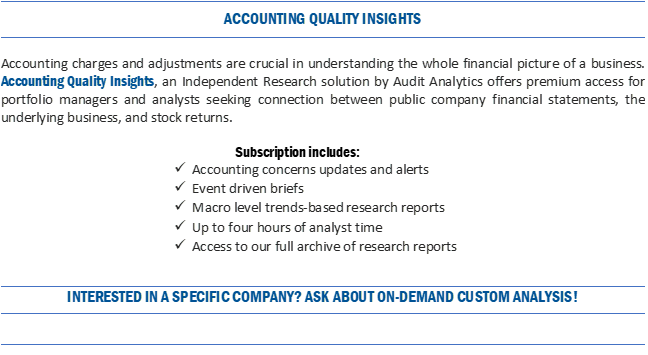