FedEx (FDX) recently announced plans to adopt the mark-to-market (MTM) method of accounting for its pensions, making it the second public company to do so in 2015. This appears to be part of a larger trend, which we will discuss further below, that has seen more than 50 companies switch to MTM since 2010. But what makes FedEx’s announcement noteworthy is the massive expense associated with the adoption.

The $2.2 billion charge is the largest of its kind since AT&T’s $2.5 billion adjustment in Q4 2010. The third largest MTM adjustment was made by FedEx rival UPS, which recorded an $827 million dollar charge in the fourth quarter of 2011.

Clearly, these accounting changes can have a massive effect on the current period financial statements. As seen below, the expense associated with the MTM adjustment single-handedly turned FedEx’s Operating Income and Net Income into large losses.

So, why would a company adopt an accounting method that has such a seemingly negative impact on its financial statements? FedEx provided three reasons in its 8-K announcing the adoption of mark-to-market pension accounting.

“This accounting method will make FedEx’s operating performance easier to understand and more transparent by immediately recognizing actuarial gains and losses in the fourth quarter of the fiscal year rather than amortizing them over many years. Mark-to-market accounting has been adopted by many large U.S. corporations, and is considered the preferred accounting method because it provides a more current picture of pension plan performance.”

The first two reasons are used by most companies when justifying their transition to the MTM method. By recognizing the pension expense immediately rather than capitalizing the costs and amortizing them, costs become more transparent. And an increase in transparency will often make operating performance more understandable. But the switch can also have a positive impact on earnings. As Michael Rapaport of the Wall Street Journal pointed out in a 2014 article, rising “interest rates and [a] strong stock market performance” can boost a company’s bottom line.

The third reason is different. FedEx cites the fact that other large US corporations have also adopted the method, and notes that it is now the preferred method.

According to our research, FedEx is correct. Over the past five years, many companies have indeed switched from the amortize-the-excess-of-the-corridor method to the mark-to-market (MTM) method. 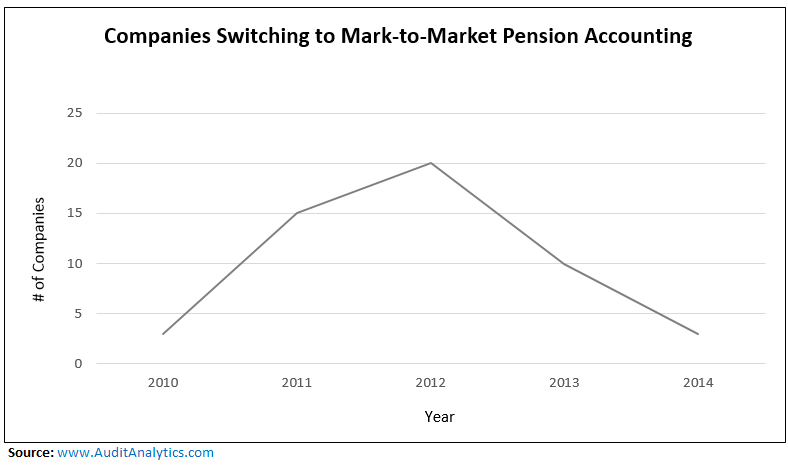 There are a few reasons behind this trend. First, the implementation of ASC 715 (then SFAS 158) in 2006 brought pension-related disclosures up out of the footnotes and onto the face financials. Second, at the time — although perhaps not right now — convergence with IFRS seemed likely (pdf), and IFRS uses mark-to-market in this situation. Companies that are dual-listed overseas might already be required to report using mark-to-market. Other reasons have to do with simplifying pension accounting and making the disclosures more accessible to investors.

Changes in accounting principles often constitute very significant events for investors, stakeholders, regulators, and – not least of all – the companies themselves. In a future post, we will cover such changes more generally, looking at trends across the board.