Emily Chasan of the CFO Journal recently reported that investors are being warned about the impending expiration of the longstanding research and development (R&D) tax credit. We put together a brief analysis of average effective tax rates, comparing companies with R&D expenses to those without.

We looked at tax footnote disclosures for Russell 1000 companies from 2008-2012. Here are some tables describing the population. 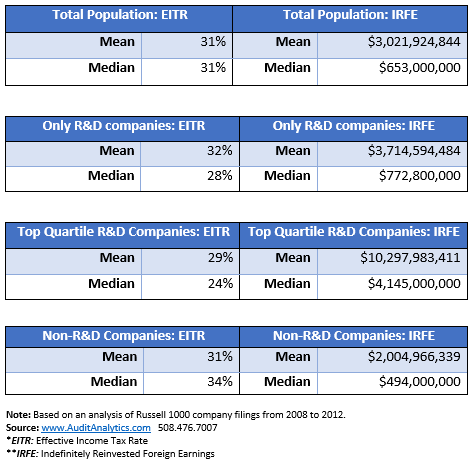 We note a couple interesting things here. First, the average and median tax rates are higher than one might expect. For all the outrage over corporations not paying their “fair share”, tax rates between 24% and 32% don’t seem to be too sensational.

Lastly, there appears to be a positive correlation between R&D expense and indefinitely reinvested foreign earnings. The top quartile R&D companies had average IRFEs of over $10 billion. This is worth noting, since we have shown before that IRFEs are associated with higher tax rates.

However, it is expected that Congress will extend the R&D tax credit before it actually expires, especially with the recovery continuing at an unconvincing pace. We doubt tax rates will increase significantly for these major corporations any time soon.

1. According to our analysis, the top quartile had R&D expense greater than $413.5 million.↩