Form 10-K provides a vast amount of information about a company and its operations. Sections of the form include a description of the business, specific risks faced by the company, material legal proceedings, and executive compensation disclosures.

Occasionally, a company might have to amend and refile one of its previously-issued 10-Ks. Sometimes material information was omitted from the original version, or there were errors that had to be corrected, etc. In such cases the company would file an amended 10-K, or a 10-K/A.

Last year, we provided an overview of the major reasons NYSE and NASDAQ companies gave for having to file amended 10-Ks in 2014. In this post, we look at the same information in 2015 and provide a year-over-year comparative analysis for the same population of NYSE and NASDAQ registrants. 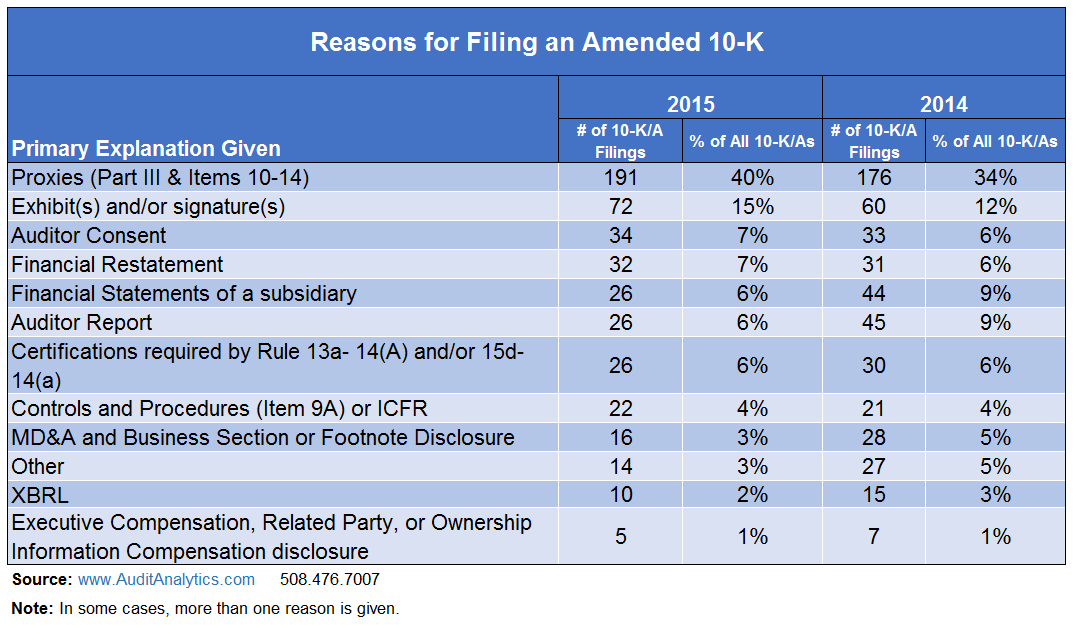 Consistent with 2014, the most common reason for the filing of a 10-K/A was to incorporate the information required in Part III. About a third of the companies that filed a 10-K/A for this reason also did so in 2014. The information required in Part III is allowed to be filed either with the original 10-K, or in a proxy statement or amended 10-K/A no later than 120 days after the period end. The instructions to Form 10-K include the following statement.

The information required by Part III … may be incorporated by reference from the registrant’s definitive proxy statement …, if such … statement is filed with the Commission not later than 120 days after the end of the fiscal year covered by the Form 10-K. However, if such … statement … is not filed with the Commission in the 120-day period …, the Items comprising the Part III information must be filed as part of the Form 10-K, or as an amendment to the Form l0-K, not later than the end of the 120-day period.

That is to say, amended 10-Ks filed for this reason should not raise any concerns, since they are completely compliant with regulations. For example:

“The Company is filing this Amendment No. 1 for the sole purpose of providing the information required in Part III of Form 10-K, as the Company’s 2015 Annual Meeting of Stockholders is scheduled for May 12, 2015, and, accordingly, the Company’s Proxy Statement relating to such Annual Meeting will be filed after the date hereof. Except as described above, this Amendment No. 1 does not amend any other information set forth in the Original Filing, and the Company has not updated disclosures included therein to reflect any subsequent events.”

Also consistent with 2014, additional exhibits and signatures were cited as the second most common reason for filing a 10-K/A. Such amendments varied from typographical or other inadvertent errors to responses to comments made by the SEC. However, while the overall number of missing exhibits increased to 72 from 60, there was a steep decline in amendments caused by SEC comments (only 16 in 2015 compared to 30 in 2014).

“This filing is being made in response to comments we received from the SEC with respect to the confidential treatment request we filed with the SEC relating to certain information contained in Exhibits 10.28 and 10.29. Pursuant to such comments, we are removing the redactions of certain of the tables of contents and the section headings in certain of the annexes to the agreement contained in Exhibit 10.29. We are also filing a new Exhibit 10.30, which consists of a schedule relating to certain annexes to the contract included in Exhibit 10.29 that were omitted from Exhibit 10.29 pursuant to Instruction 2 to Item 601 of Regulation S-K under the Securities Act of 1933, as amended.”

“In this Annual Report on Form 10-K/A (Amendment No. 2) for the fiscal year ended December 31, 2014 (“Annual Report”), as originally filed with the Securities and Exchange Commission (the “SEC”) on March 25, 2015 (the “Original Report”), Lightbridge Corporation (“Lightbridge,” the “Company,” “we” or “us”) is restating its previously issued and audited consolidated financial statements and the related disclosures for the years ended December 31, 2014 and December 31, 2013 and all quarterly periods included therein (collectively, the “Restated Periods”). As discussed in further detail below and in Note 2 to the accompanying consolidated financial statements, the restatement is the result of a misapplication in the guidance on accounting for warrants. We assessed the impact of this misapplication on our prior interim and annual financial statements and concluded that the combined impact was material to these financial statements. Consequently, we have restated the prior period financial statements identified above. Concurrently with the filing of this Form 10-K/A, the Company is also filing Amendment No. 1 on Form 10-Q/A to each of the Company’s Quarterly Reports on Form 10-Q for the quarterly periods ended March 31, 2015 and June 30, 2015, as originally filed with the SEC on May 7, 2015 and August 19, 2015, respectively. All amounts in this Annual Report affected by the restatement adjustments reflect such amounts as restated.”

Not surprisingly, material restatements are frequently accompanied by material weaknesses in internal controls:

Interestingly, Controls and Procedures remained steady in 2015. In many cases, Item 9A was revised to include additional details surrounding material weaknesses. Of note is that ICFR was a hot topic in 2015, culminating with the speech given by PCAOB Board Member Jeanette M. Franzel during AAA Conference in Chicago in August 2015.

“In the Quarterly Report on Form 10-Q of Alere Inc. (the “Company”) filed with the Securities and Exchange Commission (the “SEC”) on November 9, 2015, the Company disclosed that, during the quarter ended September 30, 2015, management identified and corrected out-of-period errors in that quarter relating to U.S. taxes on foreign earnings for the year ended December 31, 2014. The Company disclosed that management had concluded that these errors were the result of a material weakness in that the Company did not maintain a sufficient complement of resources with adequate experience and expertise in accounting for income taxes. Accordingly, the Company stated that it was revising its previous description of the material weakness that existed as of December 31, 2014.

This Amendment No. 3 (“Amendment No. 3”) on Form 10-K/A to the Annual Report on Form 10-K of the Company for the year ended December 31, 2014, as originally filed with the SEC on March 5, 2015 (the “Original Report”) and as amended on April 30, 2015 (“Amendment No. 1”) and May 28, 2015 (“Amendment No. 2”), is being filed to restate Item 9A, “Controls and Procedures,” and the “Report of Independent Registered Public Accounting Firm” (which is included in Item 8, “Financial Statements and Supplementary Data”) in order to revise the description of the material weakness that existed as of December 31, 2014 and related matters, including the Company’s remediation plans. Other than the restated “Report of Independent Registered Public Accounting Firm” on page F-2, no changes have been made to the Company’s consolidated financial statements or the notes thereto that were included in Amendment No. 2.”

To summarize, some of the reasons for the amendments are mundane and hardly of interest to investors. On the other hand, other amended filings such as those related to restatements or control weaknesses should be carefully evaluated.

Audit Analytics tracks amended filings and the reasons that trigger them. If you would like more information regarding these filings, comment letters, or any of our other datasets, please contact us at info@auditanalytics.com.