Annual reports, or 10-Ks, are known for their extensive information relating to all aspects of a company’s business. With that being said, these files leave plenty of room for missed or omitted information, misstatements, or other inadvertent errors. In such cases, the company would file an amended 10-K (more commonly referred to as a 10-K/A) in order to provide or correct the missing or incorrect information.

In this analysis, we look at the primary reasons NYSE and Nasdaq companies provided for having to file amended 10-Ks in 2017. 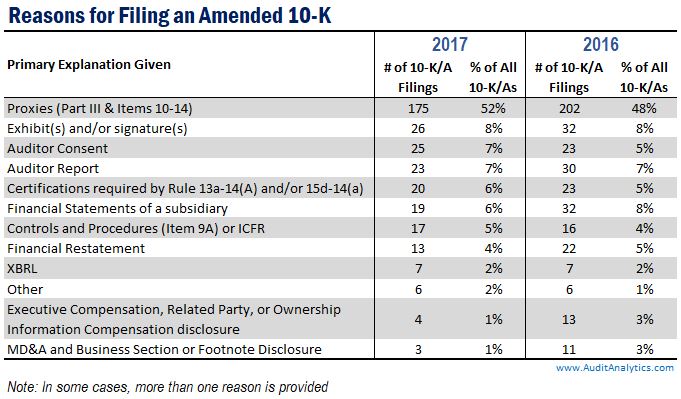 Consistent with 2016, the most common reason (comprising more than half of this population) for a 10-K/A was to incorporate the information required in Part III. This information, Items 10-14, is allowed to be filed either within the original 10-K or in a proxy statement or amended 10-K no later than 120 days after the period end. It should come as no surprise that many companies chose to file this information at a later date, after voting results become available. Amendment to incorporate Part III is a technical amendment and 10-K/As filed for this reason should not raise concerns. For example, lets look at the disclosure below:

We are filing this Amendment to present the information required by Part III of Form 10-K because we will not file our definitive proxy statement within 120 days of the end of our fiscal year ended December 31, 2016.

Missing signatures and exhibits were cited as the second most common reason (also consistent with 2016) for an amended 10-K. These amendments are frequently related to typographical errors or other small issues and do not raise alarms. Other amendments in that category, for example, issues related to re-filing of confidential exhibits following the reception of SEC comments, are of more interest. (Note: In 2017, there were nine 10-K/As that were filed in response to comments from the SEC.)

This Amendment No. 1 (“Amendment No. 1”) to the Annual Report on Form 10-K of Silver Spring Networks, Inc. (the “Company”) for the fiscal year ended December 31, 2016 (the “Form 10-K”), originally filed with the Securities and Exchange Commission (the “SEC”) on March 10, 2017 (the “Original Report”), is being filed in response to comments from the SEC regarding a request for confidential treatment of certain portions of Exhibit 10.8 originally filed with the Original Report and solely for the purpose of re-filing the agreement filed as Exhibit10.8 to the Original Report in order to restore certain redacted information that was subject to a confidential treatment request by the Company and to amend and restate the Item 15 (Exhibits and Financial Statement Schedules) and the Exhibit Index included in the Original Report.

The third most common reason for a 10-K/A in 2017 was related to auditors’ consents. Most of these amendments cited “administrative errors” as the reason for correction. For example,

We are filing this Amendment No. 1 to our Annual Report on Form 10-K for the year ended December 31, 2016, as filed with the Securities and Exchange Commission on February 28, 2017 (the “Original Form 10-K”), solely to correct an administrative error in the content of Exhibit 23.1, Consent of KPMG LLP (the “Consent”). The Consent in the Original Form 10-K incorrectly identified certain information, including the dates of the applicable financial statements and the report of KPMG LLP included in the Original Form 10-K. A new consent with corrected information is filed as an exhibit attached hereto.

Perhaps the best example of amendments that are real red flags are those that cite financial restatements as the primary reason for filing a 10-K/A. In many cases, material restatements would also be accompanied by material weakness in internal controls.

The number of amended filings citing Controls and Procedures as a reason have remained pretty steady over the past few years (17 in 2017 in comparison to 16 in 2016), with many companies revising their 10-K to include additional information surrounding a material weakness.

Electronics For Imaging, Inc. and its subsidiaries (“EFI,” “the “Company,” “we,” “us,” or “our”) is filing this Amendment No. 1 on Form 10-K/A (this “Amendment”) to its Annual Report on Form 10-K for the fiscal year ended December 31, 2016, which was originally filed on February 21, 2017 (the “Original Filing”), to (1) amend and restate Item 9A of Part II, “Controls and Procedures,” with respect to (a) our conclusions regarding the effectiveness of our disclosure controls and procedures and our internal control over financial reporting and (b) Deloitte & Touche LLP’s related attestation report due to material weaknesses in our internal control over financial reporting identified subsequent to the issuance of our Original Filing, and (2) amend and restate the “Summary Compensation for 2016” and “2016 Grants of Plan-Based Awards” portions (the “Compensation Tables”) of Item 11 of Part III, “Executive Compensation” (which information was incorporated by reference in the Original Filing to the Company’s definitive Proxy Statement filed with the Securities and Exchange Commission on April 28, 2017 (the “2017 Proxy Statement”)).

Although many of these amendments are mundane and routine in nature (such as Part III requirements), other reasons could be indicative of process weaknesses or other underlying issues and should be carefully evaluated.

Audit Analytics tracks amended filings and the reasons that trigger them. If you would like more information regarding these filings or comment letters, email us at info@auditanalytics.com or call (508) 476-7007.