In a January 2016 post, we examined trends in IPO comment letters between 2013 and 2015, including several metrics designed to shed light on the length and level of detail of the pre-IPO review process. In this blog, we extended the analysis to years 2016 and 2017 as well as the first quarter of 2018.

Most IPO companies receive questions from the SEC following a review of the initial registration prospectus. The reviews are routine in nature and usually the staff comments are resolved by adding a clarifying disclosure to an amended prospectus. Abnormally long reviews may, however, indicate substantial concerns expressed by the SEC, potentially requiring extensive changes to the prospectus.

In the following table, we provide the results of applying these metrics to S-1 and F-1 IPO comment letters from 2016 to Q1 2018:

To better understand what topics triggered the most concerns from the SEC, let’s look at the most prevalent accounting-related issues that were raised in the comment letters. 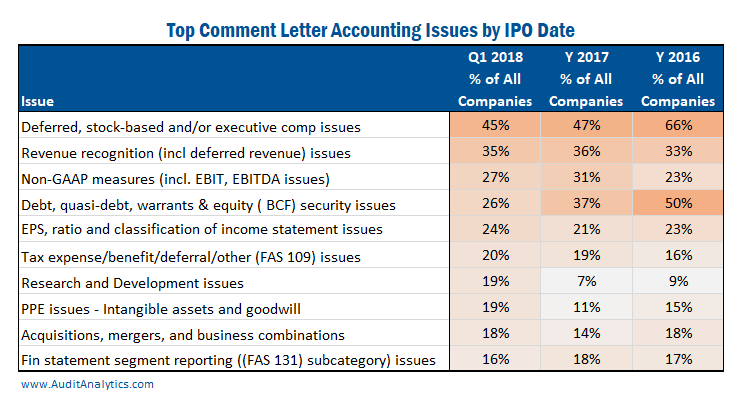 We may have additional comments on your accounting for equity issuances including stock compensation and beneficial conversion features. Once you have an estimated offering price, please provide us an analysis explaining the reasons for the differences between recent valuations of your common stock leading up to the IPO and the estimated offering price.

Revenue Recognition practices were the second most common topic in Q1 2018. The comments ranged from the establishment of performance obligation to incentives provided to customers. Unsurprisingly, some of the comments were related to the new revenue recognition standard (ASC 606):

You state your subscription performance obligations consist of licenses, PCS, and rights to continued delivery of unspecified upgrades, major releases and patches. Please provide us with your analysis as to how you determined it was appropriate to combine these promises into one performance obligation, with reference to ASC 606-10-25-19 through 25-21.

Debt-related topics, another common issue, ranged from the classification of instruments as debt or equity, to conversion terms of notes payable.

Some of the topics, such as revenue recognition and debt issues, could be found across the board. Other topics, such as comments about research and development expenses and milestone payments, are more prevalent among pharmaceutical and biotechnology companies:

Expand your disclosure to indicate the amount spent on research and development during each of the last three fiscal years.

The list above is not comprehensive and covers only a handful of the most common accounting topics. Many of the IPO comment letters include non-accounting comments, such as requests to expand risk factor disclosures and questions related to liquidity and executive compensation.

Finally, there are notable differences between the topics raised in IPO comment letters and Corp Fin reviews of the regular filings such as 10-Ks and 8-Ks. For example, between 70% and 80% of the IPO reviews included at least one Risk Factors comment. Risk Factors concerns are rare in the 10-K reviews.

For additional discussion into the comment letter process see Deloitte’s SEC Comment Letters — Including Industry Insights which highlights some of the topics above including comments related to predecessor financial statements, dilution disclosure pursuant to Item 506, and age of financial statements.

For more information about our Comment Letters database, email us at info@auditanalytics.com or call (508) 476-7007.