Large multinational companies generate revenue from multiple regions, and have assets and employees throughout the world. Recently, there has been an uptick in the number of U.S.-based companies reincorporating abroad in ‘domiciles of convenience’ to benefit from various tax and regulatory differences. In September, the Treasury took actions against tax inversions that attempt to make such moves impractical. Lately, the media has covered this topic heavily, with some members of the media defending the Treasury’s stance that inversions are harmful to the US tax base, whereas others contend that inversions are just good business, and instead point the finger at a broken, inefficient, or over-complicated tax code.

Several solutions have been suggested as to how to address the issue of corporations redomiciling abroad. The American Enterprise Institute (AEI) raised two proposals for structural changes to corporate taxation. The second alternative in particular caught our attention: to abolish corporate income tax, coupled with a new tax on American shareholders. In place of corporate income taxes, AEI’s proposal suggests taxing American shareholders of publicly traded companies at ordinary income tax levels on any dividends or capital gains they accrue, whether or not the gains have been realized through the sale of shares. Ordinary income taxation at the shareholder level would replace the existing preferential rate taxation. While AEI does concede that this proposal is not revenue neutral, it attempts to eliminate the problematic tax on corporate residence and reduce the competitive disadvantage faced by U.S. corporations relative to many foreign-based multinationals.

An assumption here is that corporations will be less likely to invert, since it would no longer provide any U.S. corporate tax savings; further, this proposal will help eliminate the ‘lock-out effect’, in which U.S. multinationals hesitate to repatriate untaxed income earned abroad.

Taxing shareholders on capital gains and dividends as they accrue would certainly be a radical change to business as usual. While this proposal would certainly present a seemingly impossible political hurdle, it is innovative discussion like this that can add to the debate. One area of consideration is how shareholders of funds will be affected. Currently, mutual funds do not pay corporate income taxes. Instead, shareholders of funds held in taxable accounts receive dividends, interest, and capital gains that must be declared on tax returns. Distributions from funds are common in the months of November and December. The Wall Street Journal recently reported that one fund in particular will pay out an astonishing more than 50% of its net asset value on December 16th. In addition, taxation occurs for mutual funds in the year that shares of the fund are sold. With an abolishment of corporate taxation and a switch to ordinary income taxation, shareholders of funds would presumably be affected as well.

In a recent post, we identified 23 active filers from the Russell 1000 with indefinitely reinvested foreign earnings that have re-domiciled to Europe. Through our analysis of filings that contain reported beneficial ownership of securities (i.e. SEC forms SC 13G, SC 13D, 10-K, DEF 14A, etc.), we aren’t surprised to see fund giants such as BlackRock Inc, Vanguard Group Inc, FMR LLC, Janus Capital Management LLC, State Street Corp, and Massachusetts Financial Services (MFS) listed as reported “beneficial owners” for the sample of 23 active filers analyzed previously. We were curious to see how many mutual funds, closed-end funds, and ETFs reported a stake of 5% or greater in any one of these 23 active filers at quarter-end for 2014. For the sample reviewed, we were able to identify 47 unique funds holding a stake at quarter-end in one of the 23 entities across a total of 70 observations.

Subsequently, we reviewed S&P 500 entities that are most commonly held as investments at quarter-end for mutual funds, closed-end funds, and ETFs. We limited our approach such that holdings reported must exceed 15% for funds reporting at quarter-end for 2014. From our results, we see that there are 127 entities from the S&P 500 that were reported at least once as being a holding of 15% or more of the funds analyzed. The table below depicts the top fifteen results of our analysis. Earnings reported are for the most recent fiscal year for each entity listed. 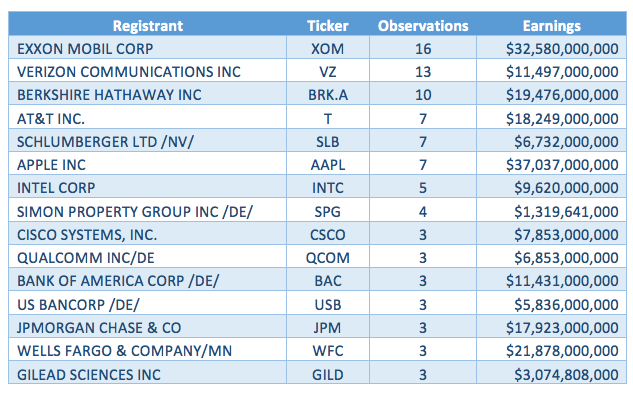 Assuming a fund portfolio consisted solely of 100 shares for each of these companies, the fund would have slightly edged the S&P 500 in 20013, 31.24% compared to 29.6%. (This comparison does not include dividend reinvestment.)

After factoring in dividends earned by investors, as well as any ordinary taxation on dividends and capital gains, investors in index funds would see further erosion in overall gain as compared to indices followed by index funds. Investors of index funds already experience taxation of capital gains distributions when a particular index replaces any stock held. Furthermore, for mutual funds that are index funds, securities must be sold (thus incurring realized gains) whenever a share redemption occurs. ETFs, on the other hand, sidestep this problem given that ETF shares are redeemed without the need for selling securities held by the ETF. Of our 184 observations where S&P 500 companies were held at quarter-end by funds analyzed, 63.0% of observations were for mutual funds. The remaining observations consisted of a split between 20.6% for ETFs and 16.3% for closed-end funds.