Earlier this year we explored departure statistics regarding general counsel and chief legal officers. In this blog, we provide an update for this year’s departures involving all director and officer positions.

So far, there have been over 8,400 records filed during 2016 with the SEC which disclosed a current or future departure of a director or officer. Unsurprisingly, the most common action for a departure was a resignation. Below is a list of the other possible actions given. 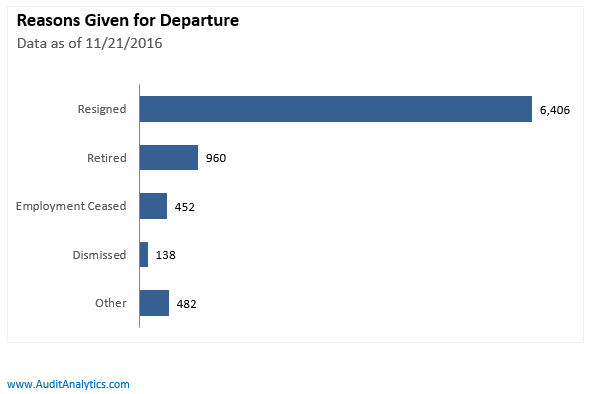 The top three reasons given for resignation were merger or acquisition, position change within the company, and the pursuit of an outside opportunity.

With so many changes involving corporations’ key players, it is no wonder that D&O changes have been a trending topic. To understand the significance of C-level changes, let’s take a look at the recent case of Wells Fargo.

Wells Fargo’s CEO resigned just weeks before the company received a Statement Regarding Revocation of Relief from Certain Regulatory Consequences of Enforcement Actions from the Office of the Comptroller of the Currency (OCC):

…the OCC informed the Bank today that it has revoked provisions of the enforcement documents that provided relief from specific requirements and limitations regarding rules, policies, and procedures for corporate activities; OCC approval of changes in directors and senior executive officers; and golden parachute payments. As a result of these revocations, the Bank is no longer an “eligible bank” pursuant to 12 C.F.R. § 5.3(g) for purposes of expedited treatment of certain applications; is now subject to the limitation of 12 C.F.R. § 5.51 requiring prior written notice of a change in directors and senior executive officers; and is now subject to the limitations of 12 C.F.R. Part 359 on golden parachute payments.

Two days ago, the General Counsel decided to postpone his retirement. According to the company, the decision was made to help with the regulatory issues following the 2 million unauthorized accounts scandal that emerged earlier this year.

Not surprisingly, the bank has made disclosures in its recent 10-Q regarding the legal actions and regulatory scrutiny pertaining to its sales practices.

Should the company face litigation, some of the legal costs could be covered by the liability insurance that, according to FindLaw, as many as 95% of the Fortune 500 companies carry. The purpose of D&O insurance is to protect the innocent director who is held liable for undesirable business occurrences beyond his immediate control, and in terms of coverage, covers the financial loss of managers from settlements, judgments, and defense costs in the case of lawsuits. –Christine Kang, Stanford University.

Overall, legal actions brought against the banking industry have been on the rise since the financial crisis of 2008. An article by Property Casualty 360 suggests that other Major Changes Coming to Directors and Officers Liability Insurance can also be expected. These changes involve classification limitations and policy issuance.

To track director and officer changes, call us at (508) 476-7007 or email info@auditanalytics.com. Audit Analytics has the ability to create daily email alerts by industry, region, and more. The Director and Officer (“D&O”) Changes database contains all Item 8-K 5.02(b) disclosures filed with the SEC since the implementation of the reporting requirement.