Overview of Out of Period Adjustments

There are two options when correcting financial statements that are immaterially misstated: revision restatements or out of period adjustments. A revision restatement corrects the error in the prior period, but does not file new amended filings for the prior period. For example, say while preparing its FY 2014 10-K, a company discovers an error in its FY 2013 financial results, which were already disclosed to the public in a 10-K. The company would have to then assess the materiality of the error. If the error does not undermine reliance on the previously-issued FY13 10-K, then the company can simply correct and restate the FY13 numbers as presented in the FY14 10-K. Restatements like these are less severe than an Item 4.02 restatement, but are still material enough to require the restatement of prior periods.

An out of period adjustment, on the other hand, is so immaterial — at least according to management — that it does not require any revision or restatement of prior period results. Instead, the company recognizes an adjustment in the current period to correct the error. For example, say a company while preparing its Q2 FY14 10-Q discovers that its inventory balance as of Q1 was overstated by $0.5 million in the first quarter 10-Q. The amount, $0.5 million, is a tiny percentage of assets and income and immaterial to the company’s results. Instead of going back and restating the Q1 financial results, the company might instead recognize a $0.5 million charge to inventory directly in the second quarter. That is, the company would record the change prospectively in the current period.

Interestingly, these kinds of adjustments appear to be increasing in frequency. As shown in the table below, the number of out of period adjustments has grown since 2010. hitting an all-time high in 2012 with over 300 adjustments. 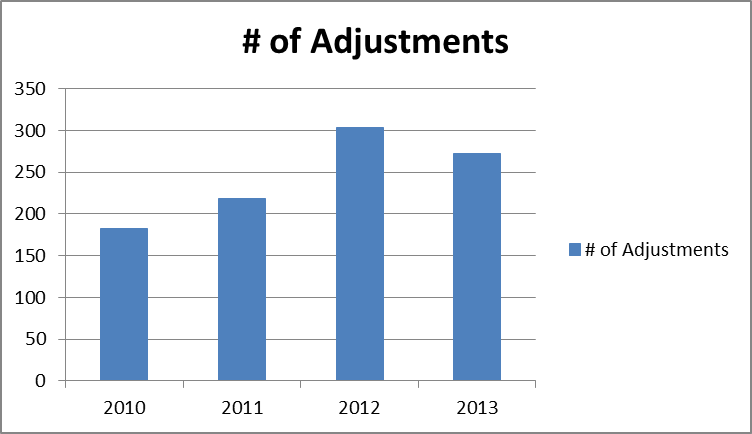 Note: Analysis based on companies traded on NYSE or NASDAQ.

Note: Analysis based on companies traded on NYSE or NASDAQ.

Though out of period adjustments are immaterial accounting errors, they can be a signal of weakness in a company’s reporting processes. One example is KBR, Inc. [NYSE: KBR]. KBR’s financial reporting weaknesses can be seen in three stages: (1) Initial signals or red flags; (2) The out of period adjustment and related signals (more serious red flags); and (3) The seemingly inevitable Item 4.02 restatement (confirmation of red flags).

Early indications of weakness came in early 2013 when KBR received a comment letter from the SEC. The SEC’s comment letter addressed a lengthy list of issues, most notably revenue recognition and the use of estimates in the percentage-of-completion method. This triggered a succession of revenue recognition and percentage-of-completion estimate changes in each period since the comment letter. By the issuance of the company’s next annual filings KBR had seen significant turnover in its executive level management. Top management is responsible for a good deal in a corporation, not least of which is setting the tone of the company. At KBR the tone could be seen as executive abandonment as both the CEO and the CFO left within about three months of each other.

Out of period adjustment and related signals

When the 2013 annual statements were filed on February 27, 2014, KBR disclosed an out of period adjustment of $17 million in regards to revenue recognition. This was immaterial to the $327 million of reported net income, but they also disclosed internal and disclosure control issues related to revenue recognition among other things. Unlike the previous “red flags”, these are explicit admissions of reporting weaknesses rather than mere indicators.

1. Classification issues were based on an analysis of adjustments that had no net dollar impact. This analysis is conducted on only companies traded on NYSE or NASDAQ.↩