With an estimated $2.8 trillion overseas, it’s no wonder indefinitely reinvested foreign earnings (IRFE) continue to attract so much attention. The White House recently issued a press release, citing Audit Analytics, calling for an end to the “offshoring model” and encouraging companies to bring profits back to the United States.

The Unified Tax Relief Framework proposes to reduce the corporate tax rate to 20%, put an end to the “offshoring model”, and apply a one-time low tax to accumulated overseas earnings in hopes of ending the tax incentive keeping those profits offshore. Whether or not this will be successful, only time will tell.

As one of our previous blogs highlighted, a “one-time tax” on IRFE did not sway such earnings in the past. In fact, these offshore earnings have increased dramatically over the last nine years. The chart below illustrates the changes in some of the highest IRFE balances in the Russell 1000 since 2008. 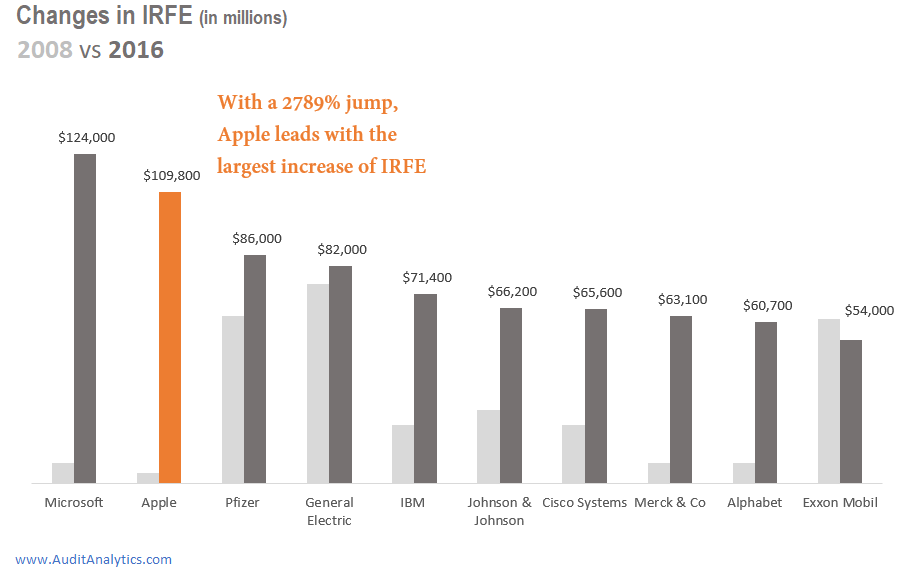 Below, we compare the two largest increases in IRFE against the balances held by General Electric and Exxon Mobil. 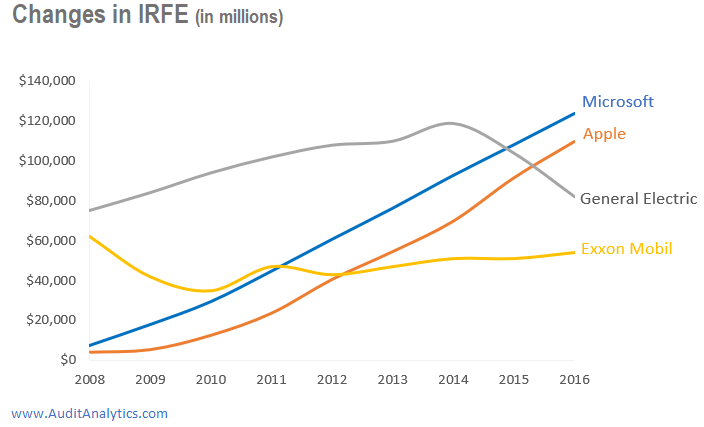 Tootsie Roll Industries Inc [TR] was another company that jumped out to us in our analysis of fiscal 2016 filings. In the 2016 10-K, they reported indefinitely reinvested foreign earnings of $22.1 million and $20.2 million for 2016 and 2015, respectively.

What explains this 470% “restatement” of what they disclosed last year? We couldn’t identify any impact on the company’s current or deferred tax provision that might reflect this change in the reported balance as of 12/31/15. This seems to be the first time Tootsie Roll has done this, but we will be sure to keep a close eye on their 2017 filing.

To request a detailed table for the top ten companies or for a copy of the full report, please email us at info@auditanalytics.com or call (508) 476-7007.