From the first draft to the final version, an S-1 prospectus of a company goes through many revisions. Financial and operational numbers, wording, composition, length – all can change significantly. What might drive these changes? In some cases, the release of new information requires the S-1 to be amended, such as the latest quarter results or a significant event that has to be disclosed. Many edits, on the other hand, stem from SEC comment letters issued to the company in the process of the SEC’s initial prospectus review.

The JOBS Act allows Emerging Growth Companies to keep the content of their S-1 prospectus confidential until near the end of the IPO process. However, 21 days before the IPO road show date, the covers come off and the S-1 is fully exposed to the public. SEC comment letters regarding various topics in the S-1 are also bound to become public domain, albeit at a slightly later date. 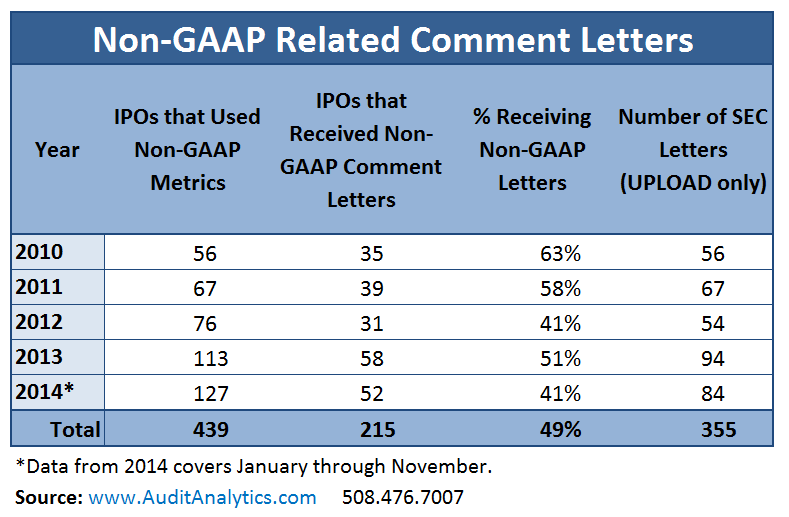 In 2010, around 63% of IPO companies that used non-GAAP metrics in their S-1 received at least one comment from the SEC addressing their use of non-GAAP. In 2014 (from January to November), that percentage stood at approximately 41%.

This controversial issue came to the fore when Groupon used an unusual metric called “Adjusted Consolidated Segment Operating Income”. The metric excluded certain marketing expenses from GAAP net loss to present positive results on a non-GAAP basis. After receiving comments from the SEC, Groupon had to modify the controversial metric and re-introduce the marketing expenses.

In many cases, these situations result in more than just one letter from the SEC commenting on the company’s use of non-GAAP metrics. Groupon, for example, was one of more than 30 IPO companies between 2010 and 2014 that had at least three rounds of non-GAAP-related conversations with the SEC. In most of the cases, the IPO disclosure was modified by either providing a better description, or by altering the presentation of the metrics.

The Groupon affair, however, does not seem to have discouraged other companies from using custom, non-GAAP metrics in their S-1 filings. A January 7, 2015 WSJ article recently discussed an increasing trend towards expanded use of non-standard metrics by IPO registrants. The article quoted a number of experts from both sides of the table. Some expressed concerns that non-GAAP metrics may be unbalanced. Others claimed that there is some value in providing potential investors with metrics that companies use internally to evaluate various aspects of their own performance, and further, that leaving them out could be misleading. Yet, the major concern raised by the article was that some companies may use non-GAAP metrics to present an appearance of profitability that belies their true financial position. We are not aware of any robust analysis that would support such a claim, which may or may not be true; nevertheless, if we look at the history of IPOs in the past few years, at least one company that highlighted non-GAAP metrics, although unprofitable on a fully-GAAP basis, failed shortly after going public.

In what some might have called the worst IPO of the year, FriendFinder Networks Inc, an operator of numerous dating websites, went public on May 10, 2011. Just a couple of years later, on September 16, 2013, the company filed for Chapter 11 bankruptcy, leaving investors with very little to recover.

In a comment letter dated April 13, 2011, the SEC raised concerns about adding back deferred revenue in the Adjusted EBITDA presentation:

10. Please revise footnote (1) to clarify where management believes that it is appropriate to add back the deferred revenue adjustment. In this regard, if you are referencing your adjustment to EBITDA on page 10, then please provide a cross reference to this section. A similar revision should be made to your disclosures on page 46.

Let’s take a look at the Adjusted EBITDA reconciliation table on page 10 that triggered this comment:

As we can see from the reconciliation table, the company had consistent losses of more than $40 million in each of the fiscal years 2008 through 2010. Adjusted EBITDA, however, was positive – mostly due to the elimination of debt-related charges and, to a lesser extent, amortization of intangible assets.

Of course, no company has ever filed for Chapter 11 because of a presentation, be it GAAP or non-GAAP. The root causes of bankruptcies are always business failures and a lack of liquidity, and Friend Finder is no exception. An analysis of non-GAAP presentations, however, can provide a glimpse into management’s own thinking, as well as — perhaps — pressure points on profitability.

Either way, non-GAAP presentations are clearly an area of concern for the SEC, as we can see based on the high number of comment letters addressing the issue.