For the sixth consecutive year, Revision Restatements, or those that do not undermine reliance on past financials, rose to 76% of all Restatements reported. On the flip side, Reissuance Restatements, which require disclosure in Item 4.02 of an 8-K and are more likely to have a negative market reaction, decreased.

Among accelerated filers, there were a total of 47 Reissuance Restatements. Of those, KBR Inc. had the highest observed adjustment to net income at $154 million. Nevertheless, KBR’s adjustment was the most modest of the largest annual negative restatements in the past thirteen years. $154 million is a drastic decline compared to, say, the $6.3 billion negative restatement made by the Federal National Mortgage Assoc. (Fannie Mae) in 2004, or the $5.2 billion restatement made by American International Group Inc. (AIG) in 2005. 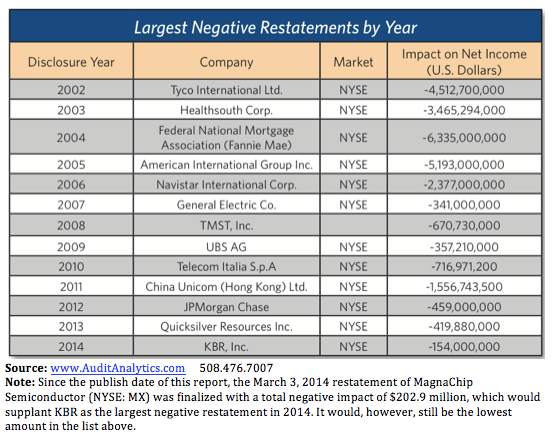 Looking back, the number of restatements peaked in 2006 with 1,842 disclosures. After a remarkable decrease down to 761 in 2009, restatements reached what looked like a baseline with 836 disclosures in 2010, remaining in the 800s for the next four years.

Consistent with trends disclosed in our 2012 Restatements Review, virtually all of the following severity indicators tracked by Audit Analytics remained low in 2014: