Last week, the Center for Audit Quality released its second annual Audit Committee Transparency Barometer. The Barometer, compiled and published in partnership with Audit Analytics, evaluates the extent of audit committee disclosures for the S&P 1500 composite companies, broken out by Large Cap (S&P 500), MidCap (S&P 400), and SmallCap (S&P 600). A comparison with the 2014 edition shows encouraging disclosure trends, as companies across all three indices appear to be both adding new disclosures and improving existing ones to include more detail regarding the activities of the audit committee.

The second edition of the Barometer provides a year-over-year comparison in key audit committee disclosure areas. Among other findings, the Barometer shows the following:

One of the key trends noticed while evaluating proxies from the 2015 proxy season is that companies are beginning to consolidate audit committee disclosures within the proxy. Instead of spreading these disclosures across a number of different sections of the proxy, many companies are designating an “Audit Committee Matters” (or similarly named) section in the proxy which includes most, if not all, of the audit committee-related disclosures. Sub-sections typically include items such as the proposal to ratify the independent auditor, audit fees, the pre-approval policy, and the audit committee report.

While the effort to more clearly organize audit committee disclosures within the proxy is a promising trend, a more important development may be the dramatic improvement in the quality and number of disclosures included.

The discussion surrounding the proposal to ratify the independent auditor is one area of audit committee disclosures that has undergone a noticeable transformation in the proxies of many companies. As seen in the Coca Cola example below, last year’s proposal was relatively brief, with a basic overview of the audit committee’s responsibilities and the appointment of the auditor.

In 2015, however, Coca Cola expanded its ratification section to include much more discussion surrounding the evaluation and appointment of the independent auditor. Beyond providing more details regarding the criteria considered when evaluating the auditor, Coca Cola went further when it defended its proposal by explaining the benefits of retaining its auditor, after all criteria had been evaluated. 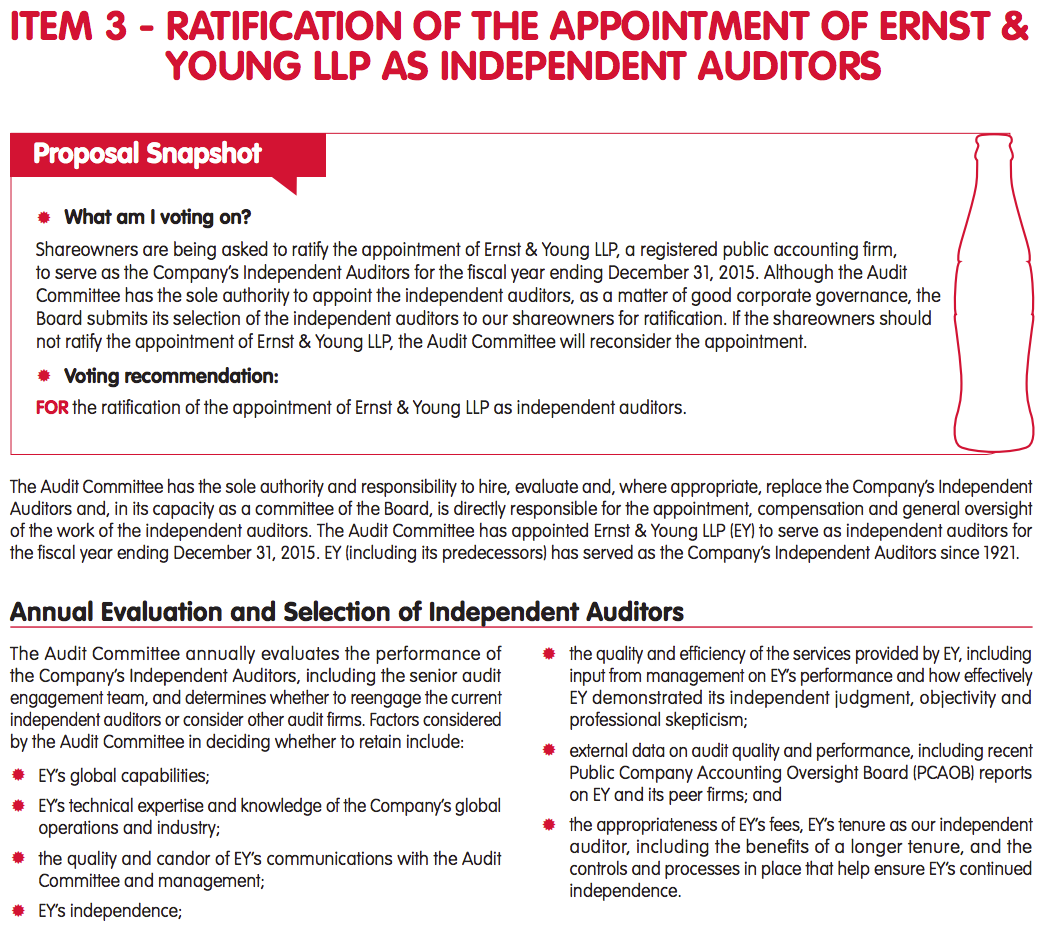 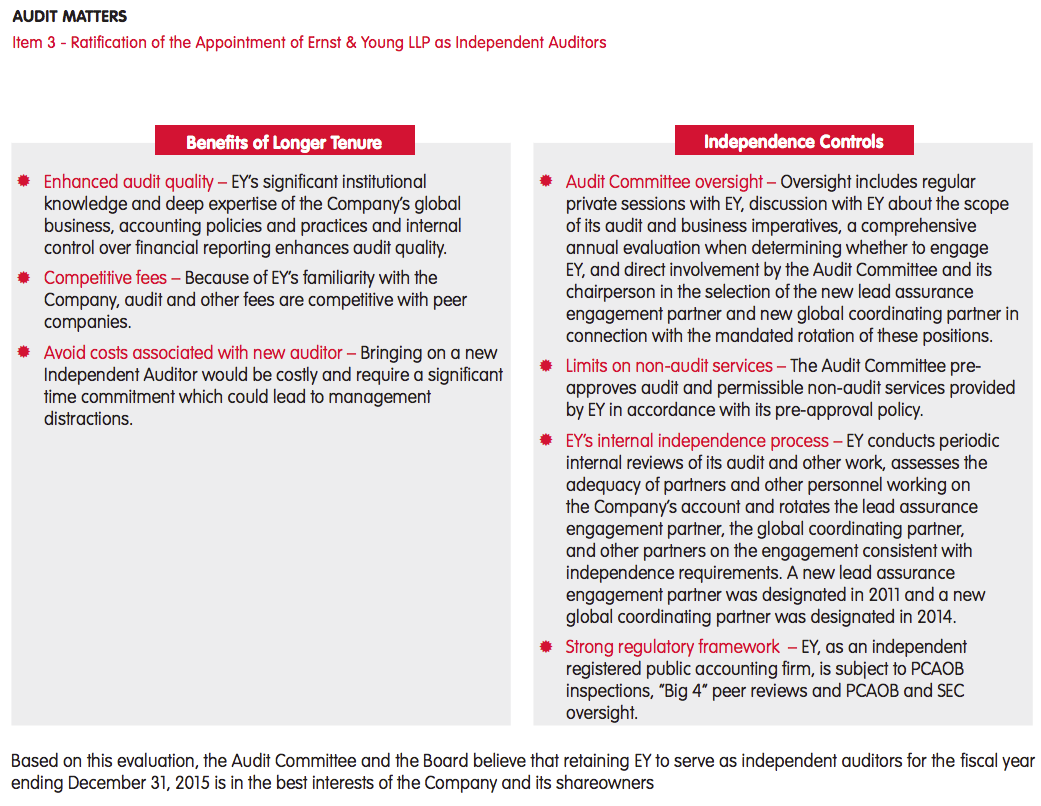 As seen above, the proposal to ratify the independent auditor appears to be evolving into more than simply the audit committee’s recommendation that the auditor be approved by company shareholders. This section is beginning to include more details surrounding the process of the evaluation of the independent auditor, both in its appointment and continually throughout its tenure with the company. In fact, the rate at which companies disclose the criteria by which the auditor is evaluated more than tripled in both the S&P 500 and the S&P 400 from 2014 to 2015. The process by which the lead engagement partner is selected and the frequency of the partner’s rotation are also points companies are endeavoring to include in this section, with both items roughly doubling in disclosure rate from 2014 to 2015 in the S&P 500.

Overall, the 2015 Audit Committee Transparency Barometer demonstrates growth in the quality of audit committee disclosures within proxies. Although there is still room for improvement, a concerted effort can be seen by companies to more clearly communicate the role of their audit committees and to provide an increased level of transparency to their investors.