The Securities and Exchange Commission recently released a summary of the agency’s enforcement activity for 2015. The announcement depicted a record-breaking number of enforcement actions initiated and monetary fines ordered.

Over the past ten years, enforcement actions initiated by the SEC for a given year ranged anywhere from 318 to 445 cases. (These cases included independent actions filed by the SEC, excluding contempt actions; that is, those cases returning to court for non-compliance with a previous court order). This year, however, enforcement actions reached a decade high of 507 cases, and total disgorgement and penalties came in at $4.19 billion.

Among the actions in 2015 were what the Division’s Director, Andrew J. Ceresney, described as “high impact” and “first-of-their-kind” actions. These unprecedented charges involved matters such as high-frequency trading manipulations, a newly-enforced mutual fund initiative known as Distribution-in-Guise, and the first non-independence matter against an auditor since 2009. 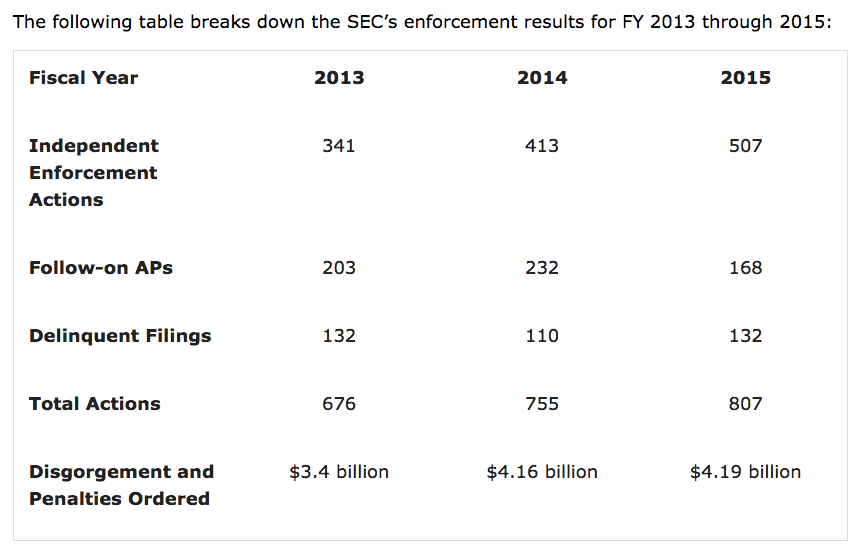 Let’s look at some of the cases in greater detail.

Earlier this year, the SEC proposed a controversial new rule to expand the clawback requirements for companies that had to restate their financials. Under the old rule, companies could only reclaim compensation paid to key executives based on incorrect financial statements in cases where the errors were caused by fraud or executive misconduct. The new regulation calls for clawbacks even in cases of unintentional error. Although cases involving clawbacks are not very common, there were three high-impact cases either initiated or closed by the SEC in 2015.

In an ongoing case against ITT Educational Services Inc. (NYSE: ESI), the SEC alleged that the company misled investors and concealed poor financial performance regarding guaranteed student loan programs. Meanwhile, the CEO and CFO received compensation in the forms of bonuses, incentive-based payments, and profits from the sale of ITT stock. In 2014, ITT announced that it would have to restate financial statements, reducing cumulative net income by almost $60 million. Under the clawback provision, the CEO and CFO would be required to reimburse the company for the earnings that were based on the incorrect financial numbers.

Similarly, eight former executives of Computer Sciences Corporations (NYSE: CSC) were charged with fraudulently inflating earnings after learning that the company would lose money in connection with its inability to meet certain deadlines for their largest contract. CSC agreed to pay a $190 million penalty to settle the charges, and five of the eight charged executives also agreed to settlements. In particular, and in addition to the penalties, the former CEO agreed to return more than $3.7 million in compensation, and the former CFO agreed to return $0.4 million.

Finally, Saba Software Inc and some of its former executives settled administrative cases related to the review of certain revenue recognition practices going back to at least 2011. According to the SEC release, US-based management directed consultants working at one of the company’s foreign subsidiaries to falsify timesheets. The goal of the fraudulent time reporting was to meet performance quotas, quarterly revenue, and margin targets by prematurely recording workable hours, or by not recording hours worked at all. As a result of the fraudulent conduct, CEO Babak “Bobby” Yazdani was ordered to reimburse Saba to the tune of just over $2.5 million. Unlike the previously described ITT and CSC cases, SABA subsequently terminated its SEC registration, without completing the restatement process or releasing restated numbers.

From 2005 to 2013, the amount of disgorgement, interest, and penalties collected from enforcement actions ranged between $1 billion and $3.1 billion annually. Amounts collected this year reached a decade high, totaling around $4.19 billion. Adding to this year’s total was a variety of large settlements. Two cases in particular took in over $74 million together.

In violation of the Investment Company Act of 1940, Charles Kokesh was ordered to pay a hefty penalty of $55 million after a jury found him guilty of securities fraud relating to his misconduct and control over two investment adviser firms. Then, just recently, the SEC brought a case to district court under the Foreign Corrupt Practices Act (FCPA) against Hitachi Ltd. The Tokyo-based company entered a $19 million settlement to resolve allegations that their lack of internal controls enabled its South African subsidiary to make and record improper payments in connection with contracts to build two multi-billion dollar power plants.

FCPA cases can often bring in large settlements. For example, in 2014 Alcoa and Hewlett Packard each payed $384 million and $108 million, respectively, to settle administrative violations. In parallel, both companies agreed to settle criminal charges. With the dramatic FIFA scandal continuing to develop, high-profile FCPA investigations are likely to continue well beyond 2015.

The above results show that this was another productive year for the Securities and Exchange Commission Enforcement Division, with no sign of a trend reversal in the near future. With enforcement actions expanding to cover relatively new areas such as high-frequency trading, the pace of enforcement actions (both legal and administrative) is not likely to decelerate.

In fact, we have already seen two successful SEC actions for FY 2016. In a continuing investigation against the St. Joe Company, the SEC collected over $3.7 million from the real estate developer and landowner. St. Joe, certain former executives, and directors in the accounting department all settled allegations that they failed to properly account for the declining value of the company’s residential real estate developments during the financial crisis, which resulted in the overstatement of earnings and assets for the following two years. The following day, DBRS Inc. was faulted for misrepresentation after the SEC found that the credit rating agency, lacking adequate staff and technological resources, failed to monitor mortgage investments by way of quantitative analysis and surveillance committee review. As Reuters points out, this was not an uncommon problem: “Investors, politicians and regulators have pushed rating agencies to tighten oversight, after faulting them for fueling the financial crisis by inflating ratings or failing to downgrade risky or illiquid securities fast enough.” DBRS agreed to pay nearly $6 million to settle the charges.