Audit Analytics recently released our annual report on going concern opinions, which looks at trends over the past fourteen years. This year the initial results appear positive because they show a drop in both the number and percentage of going concerns. However, most of the decrease is due to company attrition from the prior year’s going concern population. Additional highlights from the report include:

The number of going concern opinions issued for fiscal 2014 is estimated to be the fewest on record. After six straight years of decline, the estimated total is 2,233, which represents a 33% fall from the peak in 2008. 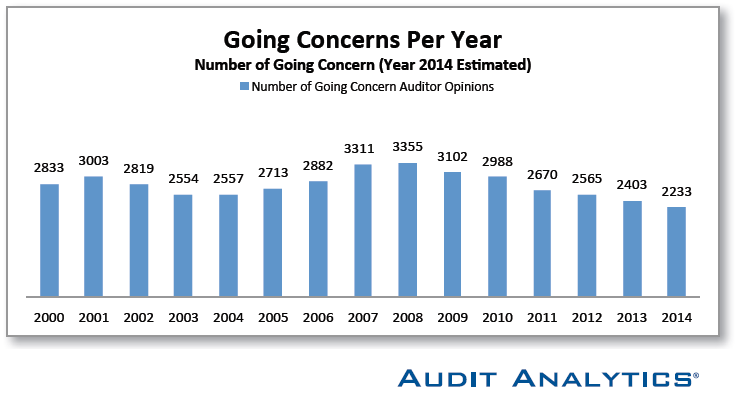 While the decrease in going concern opinions is indicative of an overall positive trend, it should be noted that 160 companies filed terminations with the SEC after disclosing a going concern in 2013. Most of the drop, therefore, was due to company attrition from the prior year’s population rather than from the improving financial health of struggling companies. 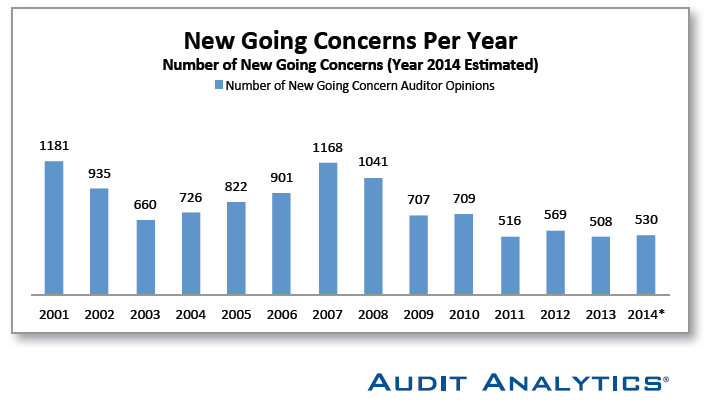 One somewhat troubling perspective is that fewer companies were able to improve their financial health and escape the doubts about their ability to continue operating. Using a multi-year analysis, we are able to identify companies that had a going concern qualification in one year but not in the following year, which can happen for two reasons: either the company’s financial health improved and the auditor no longer had substantial doubts, or the company failed to file an opinion at all and disappeared from the population. A review of this data shows that 200 companies filed a going concern in 2013, but had improved enough to file a clean audit opinion for 2014. This is up slightly from 180 in the previous year, but still represents the third lowest figure in our study. This indicates many companies that disclose a going concern continue to experience difficulties. 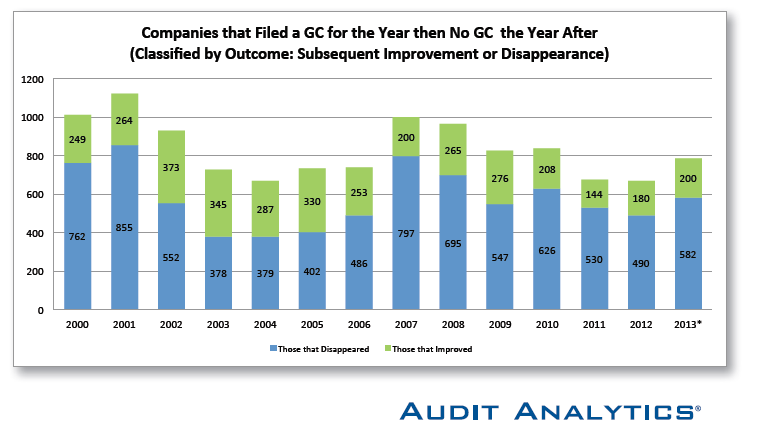 The full Going Concerns report is available free to subscribers or for purchase. Please contact us for more information.

Note: Financial statements are prepared with the assumption that a business will continue to operate as a “going concern”, that is, one that is expected to continue operating indefinitely (usually at least the next 12 months). During the course of the audit, the auditor is responsible for evaluating whether the company is likely to continue as a going concern (AU 341). If the auditor has substantial doubt about the company’s ability to do so, then the auditor is required to add an explanatory paragraph to their opinion, describing the doubt. We refer to these explanatory opinions as “going concerns”.