On Tuesday, the Center for Audit Quality released its third annual Audit Committee Transparency Barometer. Compiled and published in partnership with Audit Analytics, the Barometer evaluates the extent of audit committee disclosures for the S&P 1500 Composite companies, broken out by Large Cap (S&P 500), MidCap (S&P 400), and SmallCap (S&P 600). Analysis of the data across the first three years of this endeavor displays encouraging trends, as companies across all three indices are demonstrating a higher degree of transparency by adding new disclosures, improving existing disclosures, or consolidating disclosures within proxy statements.

The third edition of the Barometer provides continued year-over-year comparison in key audit committee disclosure areas. Among other findings, the 2016 Barometer shows the following:

While improvements in all three S&P indices have been noted over the three years of data collected, the enhancement in S&P 500 company disclosures has been especially evident. Between 2014 and 2015, it was noted that many companies were beginning to consolidate audit committee-related disclosures within the proxy. This effort to more clearly organize audit committee disclosures was encouraging to note, but the development of the quality of these disclosures seen between 2015 and 2016 is even more promising.

Last year we began to witness the transformation of the proposal to ratify the independent auditor within the proxy. For 2016, this process continued in a very noticeable manner, as both disclosure quantity and quality increased. Particularly, companies began disclosing various activities of the audit committee relating to the supervision of the independent auditor and its staff in greater detail.

Perhaps one of the most interesting increases in supervisory disclosures pertains to the rotation and selection of the lead audit partner. For S&P 500 companies, disclosures relating to the audit committee’s involvement in lead audit partner selection more than tripled between 2014 and 2016, rising from 13 percent to 43 percent. In conjunction, the disclosure rate citing compliance with the rotation requirements of audit partners more than doubled among S&P 500 companies, rising from 16 percent in 2014 to 39 percent in 2016. While this increase in disclosure rate is significant, even more encouraging is the level of detail surrounding these disclosures.

In the example below, Avery Dennison Corp demonstrated additions and enhancements in each of these discussed areas. This year’s proxy included a number of details regarding the oversight of, and the criteria considered in evaluating, the independent auditor. Avery also disclosed criteria considered in appointing/reappointing its independent auditor, and discussed the audit committee’s involvement in the selection process. 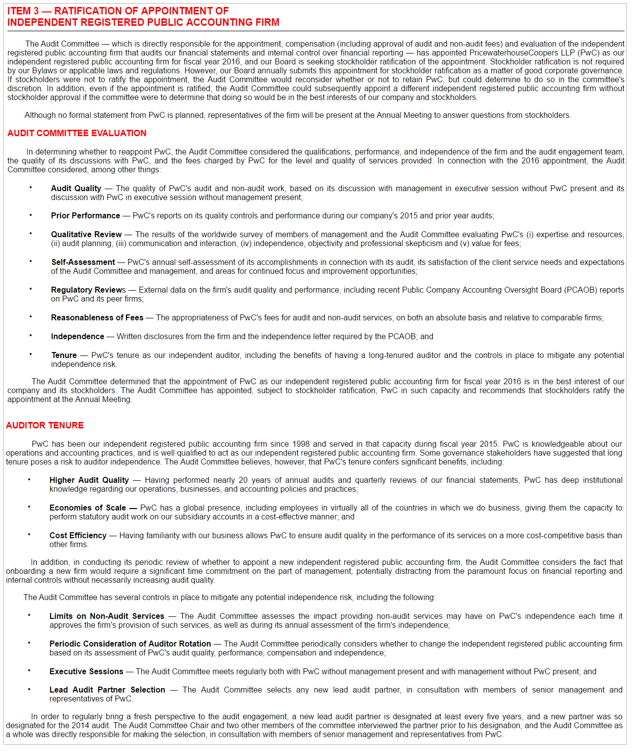 Last year’s proxy, an excerpt from which is below, showed promise in disclosure quantity, but the detail added in its 2016 report showed a remarkable increase in thoroughness.

The fact that S&P 500 companies are continuing to disclose at high rates what previously seemed to be an afterthought is an intriguing development. Similar changes in disclosures are also seen among MidCap and SmallCap companies. While the 2016 disclosure rates for audit partner selection and rotation among S&P 400 and S&P 600 companies were still low, their growth when compared to the 2014 data illustrates a significant upward trend.

Overall, the 2016 Audit Committee Transparency Barometer finds significant growth in both the quality and quantity of audit committee disclosures within proxies. It is encouraging to note the effort put forth by companies to communicate the responsibilities and activities of their audit committees, and it is promising to see trendsetters emerge among companies to set a higher standard of transparency to stakeholders.