Auditor churn among SEC registrants in the third quarter of 2016 was relatively uneventful compared to last quarter. The most movement was with BDO, which had fifteen gains and seven losses for a net increase of eight new clients, doubling their net total from the previous quarter. The Global 6 firm’s wins came from a mixture of acquisitions and organic growth.

Deloitte, RSM US, and Crowe Horwath were the only other global and national firms to see an increase during this period. PwC broke even with four wins and four losses.

The next table presents a sample of the most wins and losses for Accelerated Filers, which are companies with public float between $75 million and $700 million. 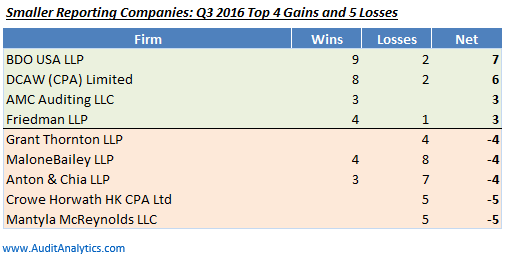 There was little activity for Large Accelerated filers. PricewaterhouseCoopers had two wins, the most for those large filers.

BDO held the top spot for both Accelerated Filers and Smaller Reporting Companies with a net increase of four and seven new clients, respectively. As noted by Accounting Today, many of BDO’s new clients came from a merger with Mantyla McReynolds, a possible contributing factor to Mantyla McReynolds’ losses among the Accelerated Filers and Smaller Reporting Companies.

Among the Smaller Reporting Companies, DCAW was not far behind BDO with eight gains and two losses, a net increase of six new clients.