Note: This post has been edited from a previous version.

With the new Form AP auditor engagement requirements soon to be in place, there is much discussion surrounding tenure. In previous posts, we noted that average tenure is between 16-23 years. For this blog, we focus on relationships that have spanned 100 years or longer.

There are 13 companies that have engaged the same auditor for at least a century. The Big Four auditors account for all of these engagements.1 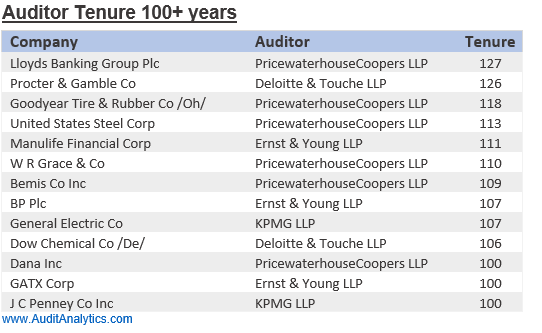 Ernst & Young, as the only auditor on record for GATX Corp, has represented the equipment finance company since at least its IPO in 1916. KPMG also has representation since 1916, with JC Penney Co Inc. JCP shareholders, who recently voted almost 99% in favor of ratifying KPMG as the company’s auditor, seem to be happy with KPMG’s century-long tenure.

After what will be 108 years, BP plc & Ernst & Young will part ways. BP recently announced a proposal…

“…to shareholders at its 2018 Annual General Meeting that Deloitte be appointed as the company’s auditor for the financial year 2018… following a competitive audit tender.

BP’s current external auditor, will continue in its role and will undertake the audit of BP p.l.c. for the financial years 2016 and, subject to reappointment by shareholders at the next Annual General Meeting, 2017.”

According to the filing, annual appointment of external auditors by AGM is required under UK law. UK and EU law now requires an auditor’s maximum period as auditor to a listed company to be 20 years, with a competitive tender process required at least once every 10 years.

Audit Analytics is set to track the new Form AP requirements staring in Q2. Contact us for more information about auditor tenure and our other available data services.

1. These relationships span many mergers and acquisitions between numerous firms. But we can trace a continuous line from the company’s auditor way back when to its current auditor today.↩