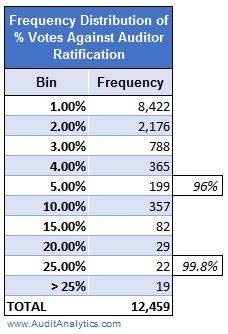 That said, sometimes shareholders – for whatever reason – vote in large numbers against the ratification of the auditor. In this blog, we look at some recent instances where shareholders did just that.

In 2016, there were sixteen companies with more than 20% votes against ratification. HealthWarehouse.com (CIK 754813), Immersion Corp (CIK 1058811) and Big Lots Inc. (CIK 768835) top the charts having more than 40% of votes against auditor ratification. Interestingly, two out of these three companies have also had a CFO change this year.

It is important to note that voting results are non-binding and management is under no obligation to accept the results. All three companies discussed above have reappointed the auditor despite shareholder objections.

Again, this is a magnified analysis as votes against ratification only comprise 1% of the total votes. For more information about Auditor Ratification, please contact us at info@auditanalytics.com