When considered as a percentage of revenue – a common metric in the industry – European companies paid noticeably less in audit fees for fiscal 2017 than did their US counterparts.

In order to perform this analysis, we compared the Russell 1000 to what we’ll call the EU 1000. To make this composite index, we began with about 2,000 companies from the major large, mid, and small-cap indices from across 21 European countries. We then limited both groups to those with fiscal 2017 revenue of at least $10 million in US dollars. Then, from the European group, we removed the companies – about 100 – that are also listed in the USA on either the NYSE or Nasdaq. That left us with over 900 companies on European exchanges to compare to the 950 or so Russell 1000 on US exchanges.

Therefore, in order to compare apple to apples, we grouped the two sets of companies into four groups of similarly-sized companies.

To do this, we first split the Russell 1000 into four equal buckets, i.e. quartiles, based on revenue. Doing so revealed that about a quarter of the Russell 1000 had revenue between $10 million and $2.1 billion; a quarter between $2.1 billion and $4.8 billion; another quarter up to $11.9 billion, and another quarter of the companies had revenue over $11.9 billion.

Then, we split up the European companies into the same buckets. That gave us the following distribution, visualized in a histogram: 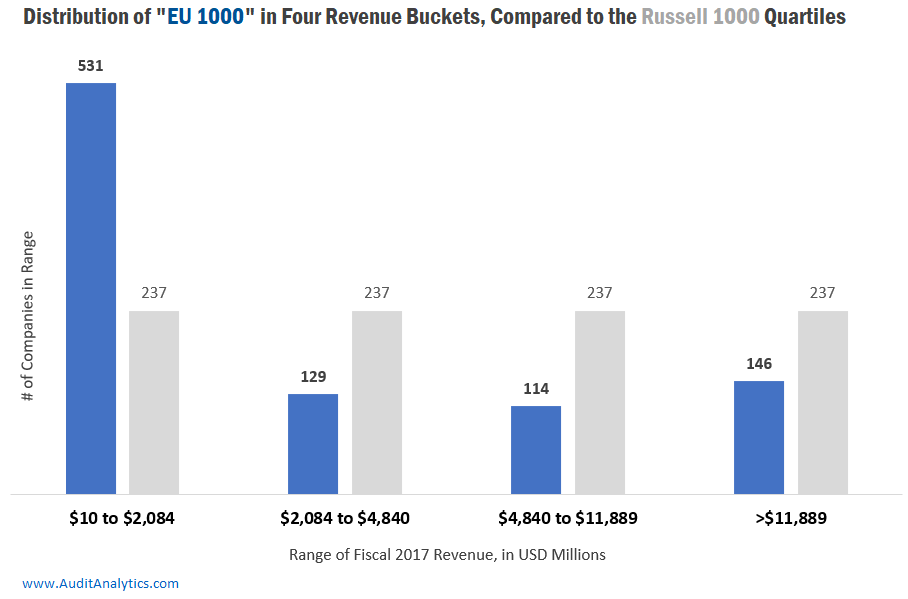 Finally, we looked at the average fees as a percentage of revenue for each of the four buckets across both the Russell 1000 and the EU 1000. 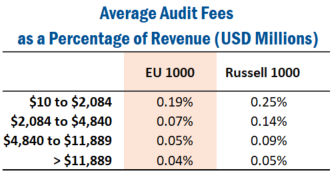