According to SEC Chair Mary Jo White, the increasing prevalence of non-GAAP reporting “deserves close attention” and “may be a source of confusion.” The SEC later published a Compliance & Disclosure Interpretations (“C&DIs”) titled “Non-GAAP Financial Measures” which provide general guidance for non-GAAP presentations.

The use of non-GAAP financial measures is on the minds of many in the financial world.  This was evident at the AICPA Conference. Not only did the conference have a panel entitled “The Prominence of Non-GAAP Measures and a Company’s Desire to Tell Their Story,” the topic also found its way into many other panels, including Wes Bricker’s remarks, the MD&A Panel and International Reporting Matters, and others.

Wes Bricker, the Chief Accountant of the SEC, explained that the SEC would be focusing on non-GAAP in a number of ways. First, companies should evaluate the appropriateness of their non-GAAP metrics. Second, companies should provide ample disclosure regarding their non-GAAP metrics’ usefulness. Third, non-GAAP metrics should not receive greater prominence than their most comparable GAAP metrics. And finally, non-GAAP reconciling items should be used consistently. This not only relates to the reconciliation of certain items period over period, but also to items that are substantively similar (gains vs. losses) within the same period.

Mark Kronforst, the Chief Accountant of the Division of Corporation Finance, elaborated on the SEC’s stance on non-GAAP, noting that, while the SEC understands and respects management’s desire to report custom metrics, the use and disclosure of non-GAAP metrics has in many cases gone beyond what the SEC deems appropriate.

Mr. Kronforst noted that the SEC is currently focused on the prominence of non-GAAP metrics. Item 10(e) of Reg S-K requires the most directly comparable GAAP measure to be given “greater or equal prominence” when reporting non-GAAP data.

The meaning of “greater or equal prominence” is a point of contention. In the May Compliance and Disclosure Interpretation question 102.10, the SEC gave bullet point examples of what they consider prominence. One example is given below:

“a non-GAAP measure preced[ing] the most directly comparable GAAP measure (including in an earnings release headline or caption).”

As Kronforst and Martin Dunn, Partner at Morrison & Foerster, joked, when there are two metrics one will always receive greater prominence. Therefore, the use of the word “equal” may be confusing. 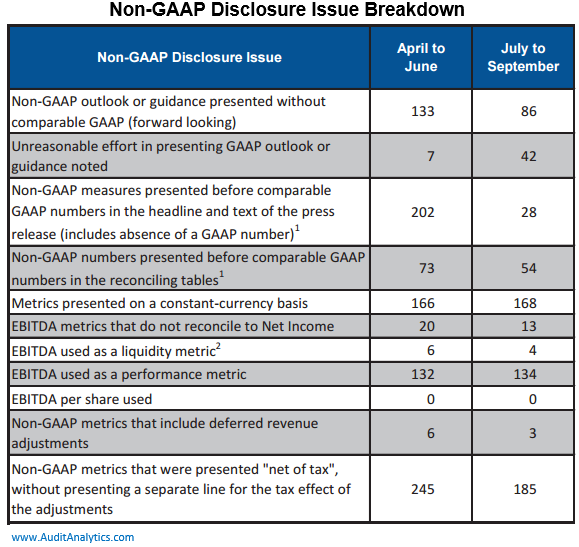 While the focus of the SEC may be on the prominence of non-GAAP, it is not the only non-GAAP issue garnering increased attention. Another focal point has been Non-GAAP revenue. Question 100.04 of the C&DI stated the following:

“Non-GAAP measurement that substitute individually tailored revenue recognition and measurement methods for those of GAAP could violate Rule 100(b) of Regulation G.”

Some news articles (see MarketWatch, Wall Street Journal) have pointed to Tesla’s recent Comment Letters as an example. The SEC referred to the non-GAAP revenue metric as “tailored” in their comments. Ultimately, Tesla decided “to remove any presentation of non-GAAP measures that adds back the deferred revenue and related costs for cars sold with resale value guarantees.”