Jay Clayton is a partner at Sullivan & Cromwell, where his practice includes public and private mergers and acquisitions, capital markets offerings, and regulatory and enforcement proceedings.

Since early 2014, Sullivan & Cromwell has been named as outside counsel for at least 112 public companies in various litigation and corporate legal matters based on public disclosures.

There are 38 other firms that are named in comment letters who represented over 100 public companies as outside counsel for the same time period. 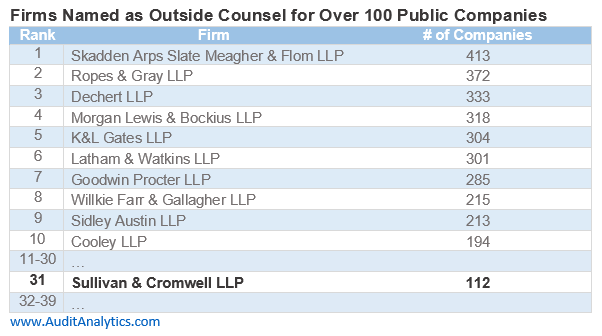 According to Reuters, under federal ethics rules, Clayton will likely have to recuse himself for one year from voting on any particular matter if a firm or individual is being represented by Sullivan & Cromwell.

Currently, Sullivan & Cromwell is named as defense counsel for RPM International Inc in Securities and Exchange Commission v. RPM International Inc et al. According to the Litigation Release, RPM International and its General Counsel and Chief Compliance Officer, Edward W. Moore, failed to disclose a material loss contingency, or record an accrual for, a government investigation when required to do so under governing accounting principles and securities laws.

RPM and a subsidiary were under investigation by the U.S. Department of Justice (DOJ) for overcharging the government on certain contracts. Moore oversaw RPM’s response to the DOJ investigation. According to the SEC’s complaint, Moore did not inform RPM’s CEO, CFO, Audit Committee, or independent auditors of material facts about the investigation. As a result of Moore’s conduct, the SEC alleges that RPM filed multiple false and misleading documents with the SEC.

As noted by MarketWatch, Trump will also have the opportunity to select two commissioners on the five-person panel, so the priorities of the SEC may change considerably.

Contact us for a complete list of the 39 firms named as outside counsel or to learn more about our market intelligence solutions for the audit and legal industries.