In the eyes of investors and stakeholders, amended filings can sometimes be perceived as a red flag. After all, in an effective control environment, registrants should presumably file full and reliable information on the first attempt. So when a company has to amend a filing — especially a periodic report like the 10-Q or 10-K — it should raise at least some concerns.

Amendments are frequently associated with a restatement of financials, but this is not the only reason, nor even the most common. With filing season in full swing, let’s take a look at the most common reasons for amended filings. For this post, we analyzed a population of roughly 500 amended 10-Ks filed in 2014 by NYSE and NASDAQ companies. 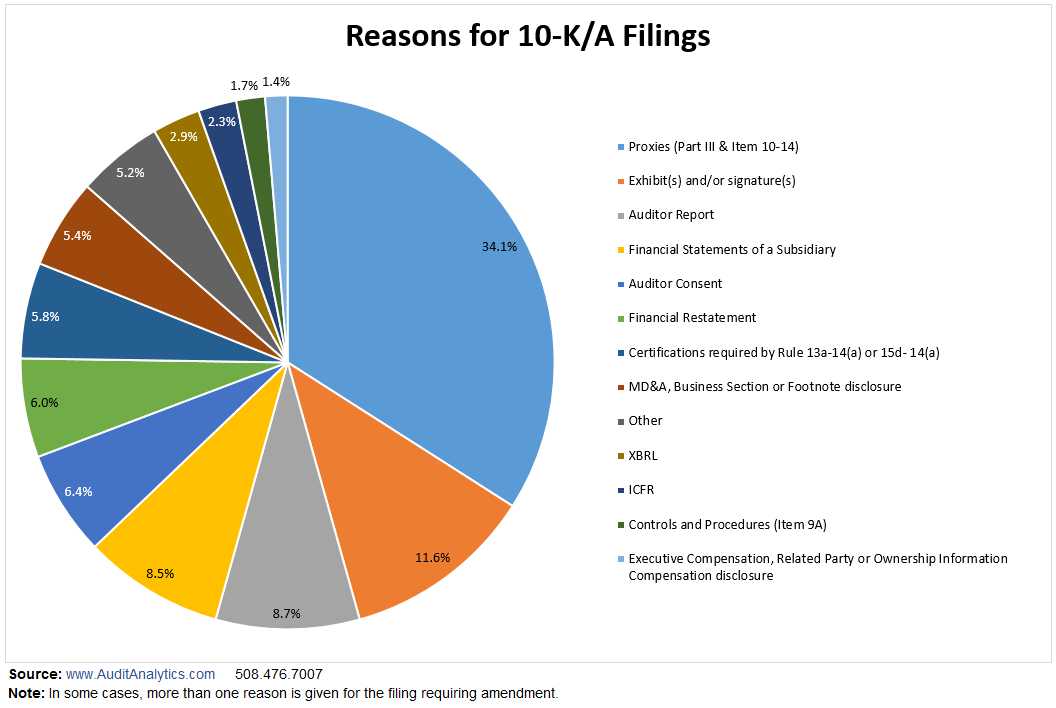 As seen in the chart above, the most common reason for the filing of a 10-K/A was to incorporate Part III/Proxy information. This should not be a concern: Part III information can be filed either with the Form 10-K, or as an amendment to the Form 10-K not later than 120 days after the period end.  For example:

The Registrant is filing this Amendment No. 1 on Form 10-K/A (this “Form 10-K/A”) to its Annual Report on Form 10-K for the fiscal year ended December 31, 2013 which was originally filed on March 31, 2014 (the “Original Form 10-K”) to include all of the Part III information required by applicable rules and regulations of the Securities and Exchange Commission (the “SEC”). Our definitive proxy statement for our 2014 Annual Meeting of Stockholders will not be filed with the SEC within 120 days after the end of our fiscal year December 31, 2013; therefore, we are filing this Form 10-K/A to provide the incorporated information within the required time period.

Missing signatures and exhibits were cited as the second most common cause for the filing of a 10-K/A. The reason behind missing or incomplete exhibits varied from a typographical error to the re-filing of confidential exhibits after the reception of SEC comments. For example:

The Company is filing this Amendment solely for the purpose of re-filing Exhibit to the Original Form 10-K in response to comments received from the Staff of the SEC in connection with a confidential treatment request with respect to the Collaboration Agreement, dated as of October 9, 2013. Exhibit to the Original Form 10-K redacted certain provisions in accordance with the Company’s application for confidential treatment with the SEC.  In response to the SEC comments, Exhibit, as re-filed with this Amendment, restores a provision that had previously been redacted.

Incidentally, at least 30 amended filings overall, or about 6%, were induced by SEC comments.

Another common reason for amended filings was to present separate financial statements for a significant subsidiary or an equity method investee, mostly pursuant to Rules 3-09 and 3-10 of Regulation S-X:

The Company is filing this Amendment No. 1 on Form 10-K/A (this “Amendment”) to its Annual Report on Form 10-K for the year ended December 31, 2013 filed with the U.S. Securities and Exchange Commission (“SEC”) on March 10, 2014 (the “Original Filing”) to amend Item 15 of Part IV of the Original Filing, pursuant to Rule 3-09 of Regulation S-X to include the financial statements and related notes a significant equity investee in which the Company holds a 49% equity ownership interest.

Only 6% of the filings cited a Financial Restatement as a reason. This might relate to a unique trend that we have noticed in recent years, where companies are disclosing fewer Item 4.02 Non-reliance restatements and more so-called “revision” restatements (i.e., restatements without an Item 4.02 8-K). In many cases, in fact, restated financials weren’t even disclosed in an amended filing at all. Instead, companies have been disclosing restated financial information for prior years in the normal, subsequent periodic reports.

For example, let’s say that during the 2014 year-end audit process, a company discovers errors in the 2013 financials, and the errors require retrospective correction. Instead of filing an amended 10-K/A for fiscal 2013, the company simply restates the 2013 numbers inside the fiscal 2014 10-K. We have been seeing more of this; and while the guidance on this issue isn’t clear, this process nevertheless seems to be a less-than-ideal way to disclose material information. It is possible, of course, that the trend is benign, and may even be a positive indication of improved financial reporting: errors are being discovered more readily during the year-end audit process, and these errors are relatively immaterial. These two factors would help to explain a decrease in the need to amend previously filed financial statements.

Lastly, a few 10-Ks were amended to include Item 9B information; in particular, information required by the Iran Threat Reduction Act:

This Amendment No. 1 is filed to disclose information required by Section 13(r) of the Securities Exchange Act of 1934, as amended (the “Exchange Act”), as added by the Iran Threat Reduction and Syrian Human Rights Act of 2012, in “Item 9B. Other Information”

Overall, while some of the reasons for amended filings are routine in nature (such as the Part III requirements), other reasons could be indicators of process weaknesses or other underlying issues. Investors should make sure to note the reason that an amended filing was required, and whether key information was omitted from the original annual reports.