There has been much discussion in recent years concerning auditor tenure, with most 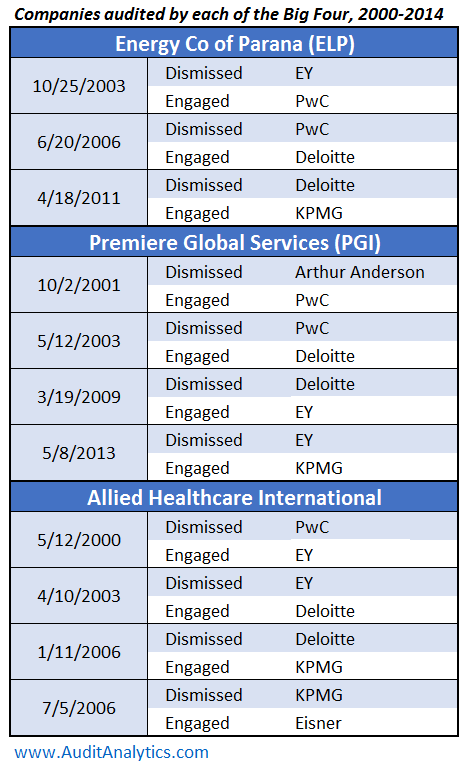 of the attention fixed on companies with exceptionally long auditor relationships. In a previous post, we noted that the average auditor tenure among the Russell 3000 was 16 years. Some relationships – amazingly – go as far back as to the 19th century.

Last year saw one of the longest auditor relationships on record come to an end. After a century and a quarter, Unilever switched from PwC (since 1890) to KPMG. This change was likely in anticipation of the regulations to limit tenure that are soon to go into effect in the EU. The British multinational Barclays, for example, also recently parted ways with PwC after 119 years.

In another post, we further noted a handful of companies that switched auditor more than once in 2014. One company even managed to switch three times in that single year.

Nevertheless, auditor changes, at least among the biggest companies, are uncommon in general. Through the first three quarters of 2015, just over 100 Russell 3000 companies have switched auditors. This is on track to match the historical rate of about 4%-5% auditor turnover among the Russell 3000.

While these exceptionally long auditor tenures with Big 4 firms are unusual and fascinating, there are four companies that, over the past fifteen years, have had a very different auditor tenure experience; the companies listed at right have been audited by all of the Big Four firms at some point between Jan 1, 2000 and Dec 31, 2014.

Along the same lines, in a review of our Auditor Changes database, we found three companies that switched auditors a remarkable 10 times over the same fifteen year span.

Here, for example, are the auditor change records for Skystar Bio-Pharmaceuticals (SKBI), a Smaller Reporting Company based in China. 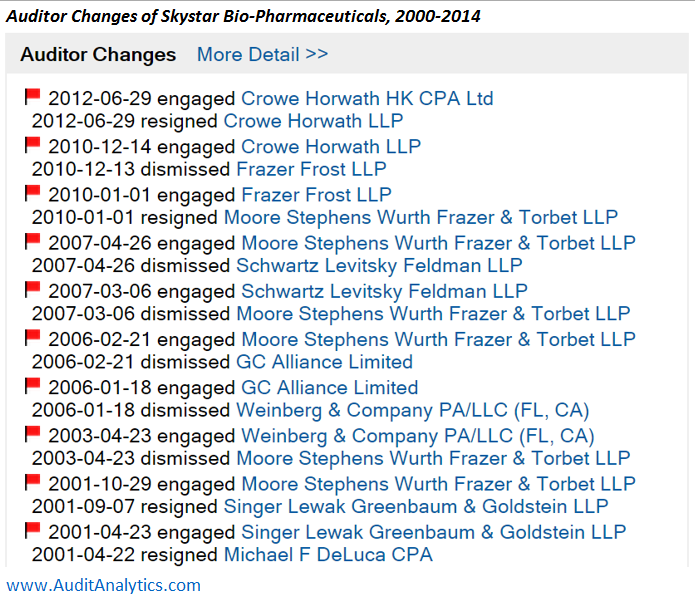 Noble Consolidated Industries and Hongli Clean Energy Technologies also have 10 auditor changes during that time frame. Among companies in the Russell 3000, CIK Code 317788 (currently Digital Turbine – see Note 1 below) led the way with seven distinct changes between 2000 and 2014.

As the tenure discussion continues, while many companies in the US have relatively long tenures, it seems that there are a few firms that are ahead of the curve in terms of auditor rotation.

Note 1: The analysis of auditor changes is based on unique CIK codes. These companies may not be one continuous entity over the entire period. Skystar Bio-Pharmaceuticals, for example, was “The Cyber Group Network” through at least 1/27/2006. So only six auditor changes were from when the company was Skystar.
Note 2: It is also important to note that some changes are due to mergers/acquisitions of audit firms. For example, the 1/1/10 change for Skystar was due to the merger of Moore Stephens Wurth Frazer & Torbet with Frost PLLC. Further, the 6/29/12 Skystar change was between two member firms of Crowe Horwath International.