In the paper, Bens et al. argue that “letter firms” (firms that have received comments specific to fair value estimates) have clearer and less asymmetric fair value disclosures in subsequent filings than “non letter firms” (firms that have not received comment letters with fair value estimates). They find that the information asymmetry associated with Level 2 and 3 assets in particular decreased for post-letters periods (as measured by lower bid-ask spreads and volatility of stock returns).

The authors examined separately the periods between 2007-2009 and 2010-2012. According to the study, the reduction in information asymmetry was more pronounced during 2007-2009. This suggests that the SEC placed additional focus on fair value disclosures during this period of time; not coincidentally, new fair value reporting standards went into effect at the time. Further, as the authors note, this period coincides with the financial crisis, which no doubt affected bid-ask spreads, stock price volatility, and fair value disclosure.

The flow of fair value letters did not cease in 2012, when the data in the paper cuts off. Recent filings between January 1, 2013 and August 31, 2015,1 show at least 731 such letters were issued to 388 Finance, Insurance, and Real Estate companies.2 (Note that not all fair value letters, as classified by Audit Analytics, focus on Level 2 and 3 assets; some relate to the valuation of goodwill or other intangibles instead.) 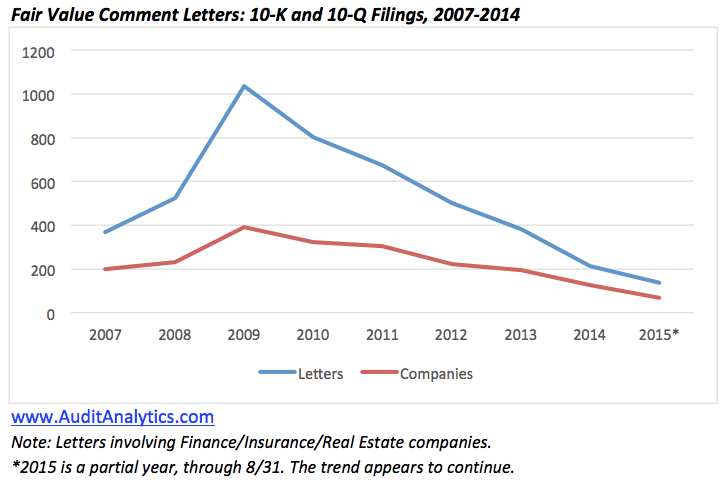 As one can see from the chart above, fair value letters peaked in 2009, congruent with the findings of Bens, et al. The subsequent drop-off in the number of fair value letters is precipitous. This likely represents a reversion to the mean, but it is also consistent with the overall decline in all comment letters that we discussed in our May post.

Yet, recently there has been a stream of letters (mostly dated between June and August of 2015) addressing fair value estimates. Interestingly, while some of these recent letters included comments related to unobservable inputs and valuation techniques (consistent with the issues noted by Bens et al.), the majority shifted their focus to making consistent disclosures by similar asset type. An example of this sort of comment, for the most part referencing ASC 820-10-50-2, follows.

1. Your discussion on page F-21 of how valuations for your level 2 fixed maturities are derived appears to be vague. Please provide us, for each “class” (refer to comment two) of Level 2 fixed maturity securities, the valuation technique(s) and inputs used in your fair value measurement. Refer to ASC 820-10-5-2bbb.

In response to comments such as these, most companies agreed to provide additional disclosure in future filings.

In general, SEC comments can be divided into two broad categories: (1) comments unique to the specific company that were raised during the review of its financial statements; and (2) similar comments that were issued to a large number of companies within a given industry, subsequent to a review of industry-wide practices. The example above appears to belong to the second category. It is not clear how many of the 2007-2012 letters were “company-specific” or “industry-specific” (or whether such a distinction is possible at all in the light of the global financial crisis of 2008).  Yet, it would be interesting to see whether the conclusion of the paper would have been different if such a distinction was made.

1. Data for 2015 covers the period of January through August, and is based on a download as of September 30.↩
2. We used SIC Codes to identify Finance, Insurance, and Real Estate companies as the basis of our analysis. The authors of the paper used a slightly different methodology. They start from a selection of companies that received fair-value letters, and then matched them to Compustat data on fair value assets and liabilities. Our results should be comparable.↩