In this analysis, we examined trends in Audit Fees and Non-Audit fees (calculated as sum of audit-related fees, tax fees and all other fees) disclosed by Canadian issuers that filed with SEDAR1.

For Canadian companies, the compensation of the external auditor is disclosed pursuant to the Multilateral Instrument 52-110 on Audit Committees, which describes in Item 9 the following categories of fees that are to be disclosed: (1) Audit Fees, (2) Audit-Related Fees, (3) Tax Fees, and (4) All Other Fees.

2,479 issuers reported audit fees in 2017, which was down from a high of 3,905 in 2011. As discussed in some of our previous blogs, the number of companies that file with the SEC also continues to decline each year.

The average fees per company increased between 2013 and 2016, and continued to increase into 2017. 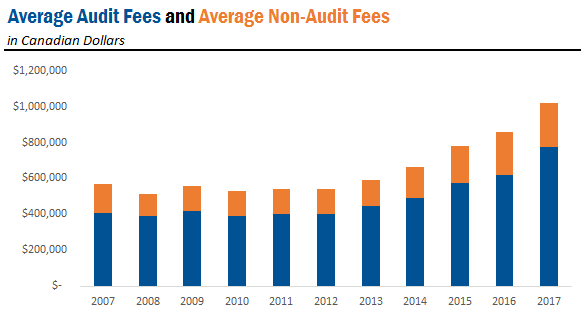 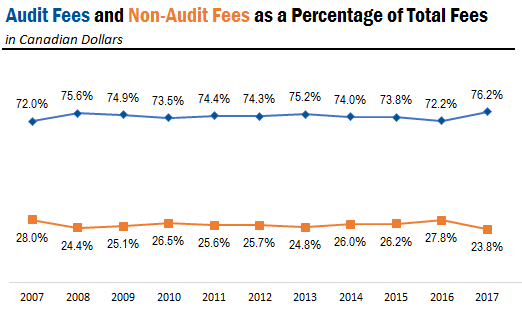 The increase is partially due to higher than normal “other fees” reported by two companies. Shire plc reported other fees of $25,027,411 related to review and reorganization of continuing projects of an acquired entity. ONEX Corporation also classified certain acquisition-related services totaling $20,944,897 as other fees. Both of these figures are more than triple the next highest other fees reported in 2016, $6,466,239 by BT Group PLC. Interestingly, the top seven highest “other fee” amounts reported between 2007 and 2017 all belonged to Shire and ONEX.

*All amounts stated are in Canadian Dollars

Audit Analytics tracks audit fees, auditor changes, controls, and restatements for Canadian issuers. For an online demonstration or to learn more about these data sets, email us at info@auditanalytics.com or call (508) 476-7007.

1. Includes dual-listed companies that file with both SEDAR and EDGAR. Subsidiaries whose fees are disclosed as part of the parent company’s fees were excluded. ↩