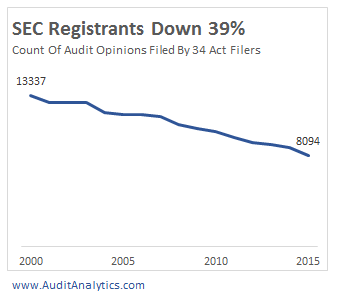 The decline in public company counts has been an acknowledged trend for quite some time. The mid to late 90’s represented a peak for public company listings, with a general downward trend forming following the tech-bubble.

As seen in the chart below, not only is the overall trend on the decline, but in 14 of the 15 years under review, deregistrations have exceeded the number of registrations. Many different explanations for this behavior have been conceived. Some point to regulation as the cause, citing increased disclosure demands from SOX 404, or the 2012 JOBS Act provision that increased the SEC reporting thresholds from 500 shareholders to 2,000. Other explanations include some combination of upward trends in merger and acquisition activity, a slowdown in the IPO environment, and a growing preference for acquiring capital through private debt rather than through public equity. 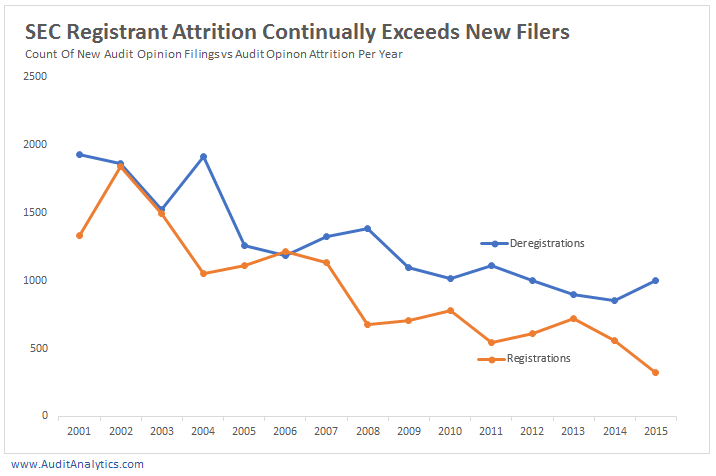 Our recent Who Audits Public Companies post notes that the greatest decrease in population last year was in “Smaller Reporting Companies” and, coincidentally, the SEC recently held an Advisory Committee on Small and Emerging Companies concerning Regulation A as well as the question ‘Why Are More Companies Staying Private?’ Regarding the latter, topics of conversation touched on the lack of IPOs, especially among the smaller companies, and increases in M&A activity.

The sentiment surrounding IPOs is a lack of urgency to go public due to the availability of private capital and cheap debt, as well as the need for a strong valuation to garner the best IPO. Similarly, the availability of debt and the prevalence of private venture capital fuel M&A activity. If an emerging company grows big enough, it may be bought via debt financing rather than go through the IPO process. Additionally, existing public companies may also be part of big M&A deals with private entities. Consider the recent agreement with Dell and EMC where nearly $50 billion was raised in debt markets to finance the transaction. 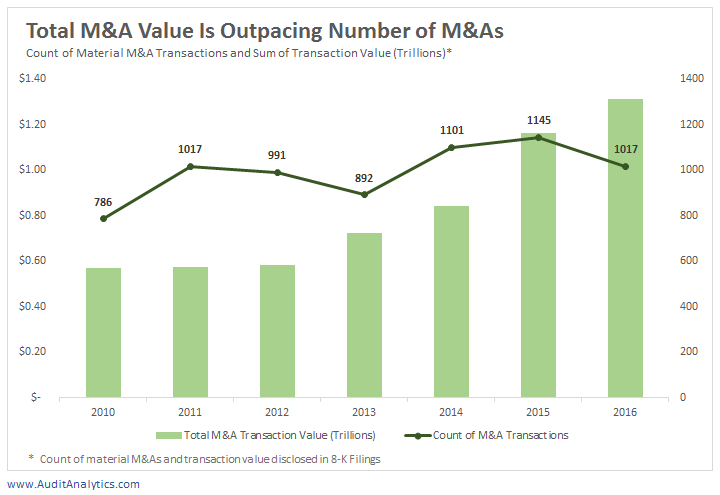 To look at M&As in terms of their direct effect on the number of SEC companies, we can also look at disclosed reasons within deregistration statements. Termination filings may be disclosed due to bankruptcy, going private, liquidation, M&A, or with no reason cited at all.

Since 2014, M&A related terminations have been increasing as a total share of deregistration statements. In 2016, M&As made up 34% of all terminations, the highest amount in the last 6 years. 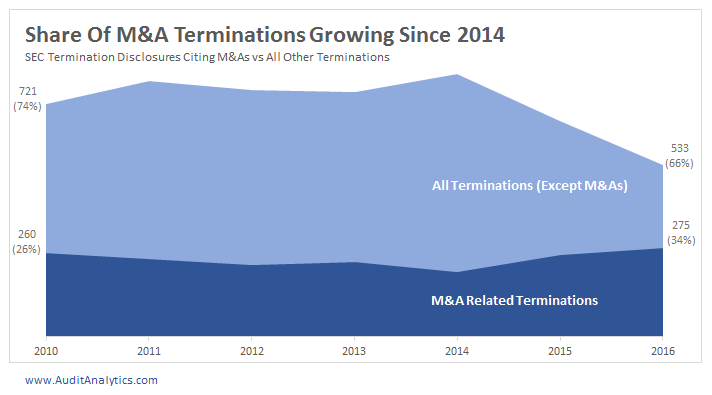 The steady fall in companies raises an existential question: will there ever be too few public companies for a robust market? Although perhaps unanswerable, it’s an interesting question to think about given the current downward trend. For how long can the public market stand to lose 3% of companies every year?

Audit Analytics tracks all auditor reports on financial statements disclosed since 2000. Key data points include office of auditor and going concern modifications. Audit Analytics’ new M&A database includes activity disclosed in 8-K filings since 2010 for all SEC registrants – data includes the auditor of record (where available), and details about the transaction, including value, description, and more. For an online demonstration or to learn more about these data sets, call us at (508) 476-7007 or e-mail info@auditanalytics.com.