On April 14, 2014, the United States Court of Appeals for the District of Columbia Circuit issued a decision in National Association of Manufacturers, et al. v. SEC, et al., No. 13-5252 (D.C. Cir. April 14, 2014). The Court concluded that Rule 13p-1 violates the First Amendment to the extent that the statute and rule require companies to incriminate themselves by stating, if necessary, that their products have “not been found to be ‘DRC conflict free'”. On April 29, 2014 the SEC issued a public statement in which it waived a requirement to describe certain products as “DRC conflict free,” or having “not been found to be ‘DRC conflict free,’” or “DRC conflict undeterminable.” A company may voluntarily elect to describe any of its products as “DRC conflict free”, but it would be able to do so only after obtaining an Independent Private Sector Audit Report (IPSA).

If you, like me, need more background to understand why this might be worth noticing, here it is in a nutshell.

In 2010, Congress legislated Section 1502 of the Dodd Frank Act, which requires companies to disclose whether any of the products manufactured or contracted to be manufactured by the company contains conflict minerals that originate in the Democratic Republic of Congo (DRC) or any of the adjoining parties. For the purposes of the rule, conflict minerals include tantalum, tin, gold or tungsten. Covered countries are defined in Section 1502 as having an internationally recognized border with DRC and include Angola, Burundi, Central African Republic, Republic of the Congo, Rwanda, South Sudan, Tanzania, Uganda, and Zambia. On August 22, 2012, after a year and a half of discussions and numerous comment letters from various industry advocacy groups, the SEC issued a final rule.

Rule 13p-1 applies to all companies (foreign and domestic) that file with the SEC and manufacture or contract to manufacture any product for which the minerals listed above are necessary for the functionality of the product. Companies subject to the Rule are required to file Form SD, the first of which were due by June 2nd, 2014. Investment companies that are required to file reports pursuant to Rule 30d-1 under the Investment Company Act are not subject to the rule.

Under the final rule, companies are required to perform Reasonable Country of Origin Inquiries (RCOI) to determine the source of the covered minerals used in the company’s products. If after performing an RCOI a company knows or has reason to believe that the minerals used are either from scrap materials or did not originate in any of the covered countries, the issuer can disclose that its products are “DRC conflict free” without obtaining an independent audit. It is required, however, to disclose in its Form SD the reasons supporting this conclusion. The companies are also required to make that disclosure publicly available and post a link to the public disclosure in the Form SD.

If a company cannot make the determination that its covered minerals are from scrap materials or that they did not originate from the DRC and its adjoining countries based on an RCOI alone, additional due diligence is required. The issuer is required to file a Conflict Minerals Report (CMR) as an exhibit to Form SD, and include a description of the measures undertaken to exercise due diligence. In these cases, an auditor’s attestation would be required if the company elected to disclose that its minerals were conflict free.

The initial estimate was that the Rule would apply to as many as 6,000 companies. The average issuer was expected to have between 1,000 and 10,000 first-tier suppliers with initial compliance costs reaching anywhere between $8 billion and $16 billion.

Let’s see how companies are dealing with the Rule. The section below provides some overview statistics and analysis of Forms SD filed by June 15th, 2014. In the first table, we show a breakdown of the top 10 industries filing Forms SD, by SIC code. 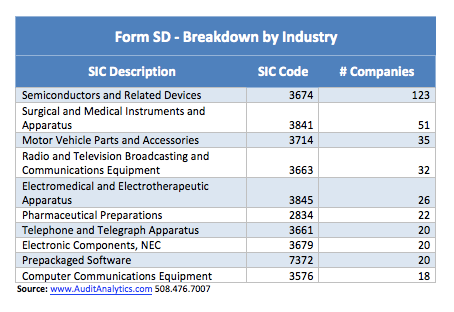 As expected, Semiconductor companies lead the list, along with other manufacturing type companies. Even some retailers were affected by the Rule.

The next table shows the total number of Forms SD that were filed as of June 15, as well as a breakdown of the Conflict Mineral Status of these companies.

A total of 1,313 Forms SD had been filed. Of the companies that filed a Form SD, 301 (about 23%) were able to determine that all of their products were “DRC Conflict Free”. All but one of these companies were able to make that determination based on an RCOI alone, and so were not required to obtain an auditor’s opinion. Only one company designated all of its products as “DRC Conflict Free” based on additional due diligence in the CMR report, and therefore provided an audit opinion to attest to this conclusion.

It is important to note that the conflict minerals disclosure is required to be made on a product by product basis, rather than company-wide or at the segment level. A small number of companies were able to determine that only a portion of their products were “DRC Conflict Free”, while the rest were “DRC Undeterminable”.

As expected, none of the companies disclosed that its products have “not been found to be ‘DRC conflict free’”. At least one company, however, disclosed that it plans “to find an alternate source for this component to avoid contributing to armed conflict in the DRC”.

We noted above that the average number of suppliers per issuer was estimated to be between 1,000 and 10,000. That estimate turns out to have been fairly accurate. For example, Cisco disclosed a list of 1,366 suppliers and smelters from which their conflict minerals are sourced, while GE surveyed 9,874 suppliers. However, most of the companies with a “DRC Conflict Free” designation either used conflict minerals in a limited number of products or had a very small number of suppliers that provided these minerals.

Our analysis identified four companies that filed audit opinions: Signet Jewelers, Kemet Corp, Intel, and Koninklijke Philips (Royal Philips). It is important to note that, even before Court of Appeals decision, the SEC granted temporary relief from the IPSA requirements to companies with “DRC Conflict Undeterminable” status. Larger companies were relieved from the IPSA requirements for the first two years following November 2012, while smaller reporting companies were granted a four year exemption.

Interestingly, none of the auditor reports attest to the conclusions reached by the respective companies in their Form SDs. Instead, in each case the auditor examined the design of the company’s due diligence procedures and whether the company performed the procedures as designed. For instance, the auditor’s report in Intel’s Form SD specifically mentions that their examination did not evaluate the following (emphasis added):

Our examination was not conducted for the purpose of evaluating:

This, in fact, appears to be the common disclosure. Koninklijke Philips (Royal Philips) had the same similar language in its auditor report, as did Kemet. Signet’s auditor report had different language to the same effect.

Given the complexity of the rule and the extent of the effort required to comply, it comes as no surprise that, as permitted by the initial transitional period, most companies were not able to reach a determination as to its DRC conflict minerals status. Common reasons cited for this included an inability to obtain information from the suppliers on a product level and inadequate response rate from the suppliers in general (in some cases, less than 20% of the suppliers responded to the initial inquiries). It is interesting to note that more than a hundred of filers (or about 8%) indicated that at least one of their suppliers is sourcing minerals from the conflict areas. However, many of them also stated that the suppliers are certified conflict free smelters, meaning that proceeds do not benefit any of the armed groups.

At the moment it is hard to estimate the effect of the rule on the impacted companies, or measure shareholders’ reaction to these Section 1502 disclosures. There is at least one academic paper that suggests that increased transparency when it comes to social matters have positive impact on shareholders’ value. We will continue to monitor these disclosures, and a comprehensive database of them is under development.

Note: The results are based on preliminary analysis of Forms SD filed by June 15th 2014. The final count may differ if additional Forms SD are filed or as we add granularity to the analysis.